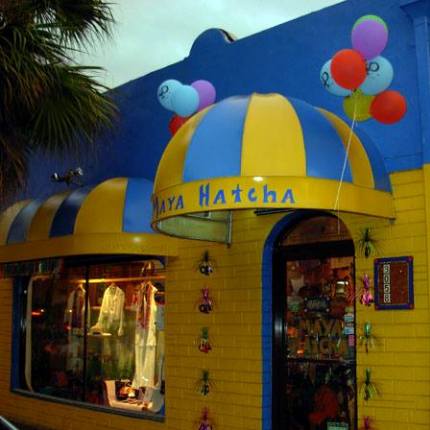 Will the last hippie to leave Coconut Grove please bring a tie-dyed scarf and some incense from Maya Hatcha?

For half a century, Vivian Jordan has been selling clothes, jewelry, handbags and hammocks from her Maya Hatcha boutique on Grand Avenue while observing — and surviving — the evolution of Coconut Grove.

But the next incarnation of Miami’s once-bohemian neighborhood may not include its oldest retail business.

Jordan, who opened the store with her sister Sylvia in 1968, may depart the bayside village, as did the free spirits, folk singers, poets and artists who used to be her customers. Her lease runs out in August. She expects rent on the property, now owned by the developers who are renovating the CocoWalk mall and office complex across the street, to increase significantly or to be offered a month-to-month deal until the building is redeveloped. She is debating whether to close, move or seek investors.

Maya Hatcha is one of those institutions that has kept the nut in Coconut Grove. Internationally known for its funky fashions, natural fabrics and indigenous crafts, the store has somehow remained timeless even as the old Grove has been Starbucksized and McMansioned around it. In fact, the Starbucks from CocoWalk — which was home to Hooters and the Cheesecake Factory before the monstrosity began its current reinvention as a hub for hedge fund office suites — is moving next door.

“I’m still in love with the Grove; it’s been my life,” said Jordan, 69, standing amid the Nepalese tunics, Indian bedspreads, batik sarongs, Indonesian dragons, woven Colombian mochilas and hand-carved Oaxacan alebrijes filling the shelves of her store, where the aroma of patchouli oil never fades. She’s wearing intricately beaded bracelets from Mali. “The Grove is where Maya Hatcha was born and where it should stay. People are coming in and telling me, ‘Oh, no, you can’t leave!’”

Jordan, a native of Guatemala who grew up in Coral Gables and graduated from the University of Miami, has been operating in the Grove since David Crosby and Joni Mitchell lived on a sailboat at Dinner Key, since the Grove Art House was filled with the studios of painters, potters and sculptors, since Groveites walked from their bungalows to Peacock Park to play bongos and smoke pot. Dustin Hoffman used to shop barefoot at her store. Timothy Leary came in. The cast of “Hair” from the Coconut Grove Playhouse bought clothes. Rita Marley, the Jamaican singer and the widow of Bob Marley, is a loyal customer.

“The Grove was a different world back then — very laid-back and friendly,” said Jordan’s sister, Sylvia, executive director of Coconut Grove Cares at the Barnyard. “A lot of hippies, flower children, street musicians and Hare Krishnas hanging out. Cofffee houses. Communes. The Anchorage was like a neighborhood on the water. We used to let people who didn’t have a place to stay sleep in the shop and we never got ripped off.”

Jordan remembers when embroidered Mexican wedding dresses were popular (and customers return to reminisce about their weddings). She has been a fixture in the Grove since the heyday of the Hamlet bar, Grove Cinema, Village Inn and I-Ching. She sold African and Asian accessories to the Mutiny’s interior decorators during the snorting 1970s and ’80s when the hotel and club were Miami’s playground for cocaine debauchery.

“I carried paraphernalia and rolling papers for a while, but when coke users started coming in, I stopped. That was not my clientele,” said Jordan, who also owned a punk boutique called Electra for six years.

Amy Billig, the 17-year-old who went missing on March 5, 1974, while hitchhiking to her father’s art store in the Grove — and whose case remains unsolved — used to work at Maya Hatcha with her brother Josh.

Jordan paid $100 in monthly rent when she opened a year after the Summer of Love in a space formerly used as a fruit-packing plant, the kitchen of Lyle’s pharmacy and lunch counter, and a record store. Today she’s paying $3,000. The property also encompasses Grove Ink Tattoo, El Taquito, Robin in the Grove Jewelry and the Tavern. When their leases run out they may face the same choices as Jordan. Last summer Rani’s, a 46-year-old clothing store on Main Highway, closed when rent was raised from $5,000 to $8,000. Wine bar Vino’s in the Grove also closed in 2017 because of a rent hike; Books & Books recently opened on that site.

“The Grove is the only area around here that still has character,” said Rani’s longtime owner, Zahir “Rani” Merali, who said business had decreased 35 percent. “But it’s not going to last. It’s going to look like Coral Gables.”

Jordan doesn’t want Maya Hatcha to become another shuttered storefront in the Grove, where vacancies are up despite an influx of restaurants.

“It’s not normal to have all these vacancies and For Lease signs,” said Jordan, who is a real estate agent. “We’re not getting the foot traffic we had. The weekends used to be packed. It becomes a vicious cycle. People complained about parking, then construction. Now the city is redoing the sidewalks, which will kill us, even though they need to be fixed.

“September, October, November have gotten slower and the internet has hurt us in December, which used to be a big month.”

Jordan said older businesses like hers will suffer the most if the Grove goes upscale. New apartments and offices are in the works and the five luxury condo towers going up on Bayshore Drive in addition to the giant, sterile, white cube houses replacing charming cottages on the Grove’s jungly streets will bring in a higher tier of wealth, Jordan said.

“Real estate for homes is definitely hot, but the business district is another story,” said Jordan, whose sales are down 10-15 percent the past two years. “The developers say they want to keep the Grove groovy, they want a nice mix, but maybe my kind of store isn’t nice enough. The landlords need to care about the past, the locals. I think they want something new for the newcomers, but that’s just not the personality of the Grove. It would be bizarre to ruin the village atmosphere by catering to the super rich.”

Jordan is particularly sensitive to overdevelopment because she has lived for years on one of Miami’s few protected natural tracts. Her late husband, Lee Anderson, was superintendent of the Montgomery Botanical Center on Old Cutler Road and she still lives in a house on the 128-acre property they shared with peacocks, coyotes and two crocodiles — one of which just had babies in the sinkhole behind the house. But soon Jordan will have to move out to make way for the new superintendent.

She shouldn’t be displaced from Maya Hatcha, too. She is one of the few remaining links to the history of the Grove, the oldest place in Miami, dating back to 1873, when a post office was established. Nine years later, Charles and Isabella Peacock opened what became the Peacock Inn with a view of Biscayne Bay. And Maya Hatcha is where you can buy the perfect linen harem pants, straw hat and water buffalo sandals for a stroll along that waterfront before it’s blocked by high-rises.