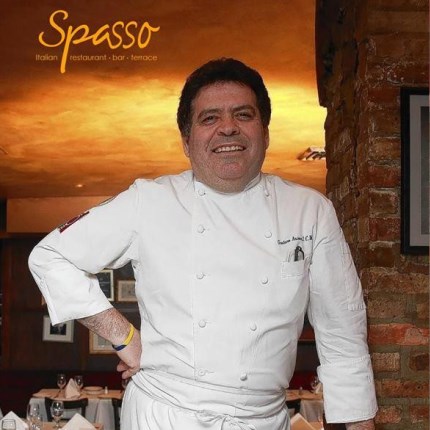 The Place: In the former Calamari space on the quiet end of the Main Highway in Coconut Grove, Spasso is a sprawling restaurant with white tablecloths, a bar, a long open kitchen and a patio with a fountain, hanging potted ferns and a huge oak tree strung with twinkly lights. Spasso means enjoyment, amusement and entertainment, and folks come for housemade pastas and stone-fired thin crust pizza.

The History: Owner and Chef Gaetano Asciono, from Salerno near Naples, graduated from the Instituto Albberghiero di Stato, a government-run culinary school in his hometown. He then worked as a chef in Italy, Germany, England, Korea, Singapore, South Africa and the Bahamas and is still involved with his restaurant Gioco in Chicago. The chef spent 16 years in Singapore, where he bribed the principals of his children’s schools with what he calls “the power of cheesecake” to avoid years-long waiting lists to get them in. In Singapore he ran the Mandarin Marina and opened Gaetano Italian restaurant in Chinatown; La Stella (named after artist Frank Stella, who helped open a print institute in Singapore with printmaker Ken Tyler); and Madam Wong above a disco. He came to Miami in 2007 to visit relatives, stayed and did restaurant consulting and also opened Gaetano in Coral Gables (now shuttered). He opened Spasso last February.

The Food: The dishes here are simple and use high-quality ingredients. Start with prosciutto with seasonal melon or a salad of steamed pencil asparagus with shaved Parmesan in thyme dressing. Pizza includes a classic Margherita and one with wild mushrooms, goat cheese, pesto and white truffle oil. For pasta try penne arrabiata in a spicy tomato sauce with garlic and red chile flakes; penne amatriciana in tomato sauce with guanciale (pork cheek) and pecorino from Amatrice in a mountainous region in the heart of Italy; four cheese ravioli; and tortellini stuffed with spinach, mozzarella and pecorino in truffle fondue. There’s also seafood and wild mushroom risottos. Fish include whole roasted branzino in puttanesca sauce; filet of grouper with cannellini beans and arugula; and Scottish salmon with potatoes, olives and greens. From the grill comes Italian sausages, steaks and lamb and veal chops. Satisfy a sweet tooth with pear or apple tart or a chocolate soufflé at this authentic Italian addition to the Grove.

You Didn’t Know This: Chef Asciono served two U.S. presidents, Jimmy Carter and Ronald Reagan, as chef de cuisine at the Georgetown Club in Washington. He also served as executive chef for the inaugural banquet for president Nelson Mandela in Pretoria, South Africa, and has been executive chef in such diverse places as the Palace Hotel and Casino in Sun City, South Africa; the NATO Allied Officers Club in Naples; the Paradise Beach Hotel in Busan, South Korea, and the oldest private club in Singapore — the Tanglin Club.