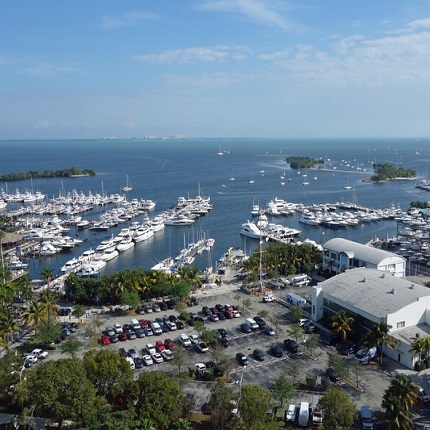 A final round of repairs is still needed to bring Dinner Key back to its former glory.

Miami commissioners are to consider approval of a final contract with Kearns Construction Co. to repair the city-owned marina.

Under consideration is a change order with Kearns for design-build services for Dinner Key Marina repairs and restoration, for up to $300,000 for additional repairs, increasing the limit of the contract from about $22.4 million to a not-to-exceed total of $22,788,038.

Before Irma hit on Sept. 10, 2017, Dinner Key Marina was the largest wet slip marine facility in Florida. City officials estimated Irma destroyed 60% of the dockage. City staff worked several months to prepare a formal request for proposals to repair and rebuild the marina, which was finally issued in November 2018. According to a background memo, the initial project consisted of restoring or replacing the docks and utilities that the hurricane damaged.

The overall project goal was to efficiently return the marina to operating conditions by restoring or replacing the concrete and timber dock structures, fire protection system, shore power, lighting, sewage pump-out, domestic water and communication and security system. A notice to proceed was issued July 8, 2019.

As recently as early June of this year, the city’s Department of Real Estate and Asset Management (DREAM) authorized the replacement of 10 mooring piles over the quantity stipulated in the contract with Kearns. It has been determined that another 90 mooring piles are in very poor condition and will need to be replaced in the short term, according to a background memo on the latest changes.

“DREAM has determined that it is in the best interest of the City to a) conduct the additional mooring piles replacement before Kearns demobilize to allow for the boats to move back into the marina, and b) replace said pilings at the price agreed to in April 2019, which is about 40% to 50% less than the current estimated market unit price for the replacement of similar mooring piles,” the memo says.

Funds to cover the repairs and restoration are from several sources including city insurance; approved funding from the Federal Emergency Management Agency (FEMA); state and city matching commitment to FEMA’s funds (about 10%); a Florida Inland Navigation District grant of $1.2 million; and other city funds.

In its quest to hire a company for the repairs and restoration, the city offered a history of the popular Grove waterfront and the marina at 3400 Pan American Drive, as part of the original request for proposals. The marina generally consisted of nine piers constructed of fixed concrete docks with approximately 582 wet slips.

“The area along Coconut Grove in Biscayne Bay has a long history of waterfront use beginning with the Naval Air Station in 1918, and with the Pan American Seaplane Terminal from 1932 to 1945. The original terminal building is still utilized as City Hall,” the document reads.