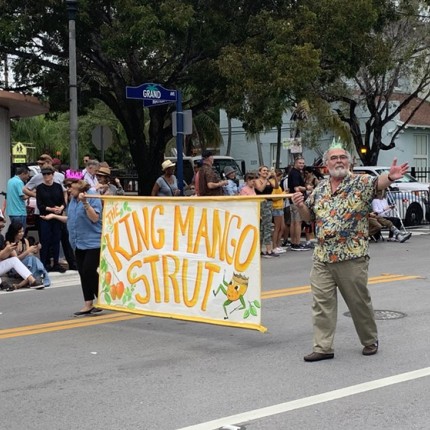 The King Mango Strut, which celebrated its 38th-annual march on Main Highway and Grand Avenue this past Sunday, is designed to be ridiculous and mock some of the year’s biggest news stories, so in many ways, the dark clouds that occasionally gave way to rain over the Grove yesterday acted as a fitting analogy for the parade itself: Even through adverse and upsetting conditions, the show (and the laughter) must go on.

President Trump has provided prime parade fodder over the past three years, and yesterday’s demonstration was perhaps the most playful yet, as opposed to previous years’ editions, which have been primarily rooted in frustration.

As the years have passed, King Mango Strut attendees have become familiar with the various groups that perform antics. As is customary, a large truck carrying a group of young girls — affectionately known as Little Miss Mangos — opened Sunday’s spectacle, followed by regular favorites such as the Coconut Grove Juggling Exchange and the Miami Hash House Harriers‘ “Running of the Bullshitters.” The latter, as its name implies, ran laps around the parade route while mocking every display.

Take, for example, the Sierra Club, which never fails to put on a show that’s as entertaining as it is educational. This year, the Miami chapter of the environmental organization formed the “Anti-Plastic Police Force,” with members dressed as police officers harassing and faux-arresting paradegoers drinking from plastic water bottles and using plastic straws. As the City of Coral Gables continues its legal fight against the state for its single-use plastics ban, it was a timely choice, especially considering South Floridians’ proximity to oceans and the devastating effects of single-use plastics on their ecosystems. Naturally, the Running of the Bullshitters mocked the group and proclaimed its love for plastic straws.

The Sierra Club’s demonstration would’ve made Greta Thunberg proud, for it included two Thunberg lookalikes. Not far behind the second doppelgänger marched her high-profile bully, this time in inflatable-chicken form complete with a blond toupee. A large group of people dressed in red robes and white bonnets surrounded the float as a way poking fun at the Trump administration’s policies that resemble the nightmarish life in The Handmaid’s Tale. “Blessed be the fruit,” they happily declared; in this case, the fruit was an “imPeach,” with dozens of peaches emblazoned on the group’s signs that named various handmaids, such as Ofdonald and Ofnancy. The lone visible Trump supporter in the crowd found the display hilarious and recorded a video of himself chanting, “Four more years,” while the group passed.

Though a handful of jabs at the infamous Art Basel banana popped up throughout the parade, it was the “Art Basel Auction” toward the end that highlighted the goofiest local news story of the year in a classically goofy King Mango Strut way. People were dressed as bananas with expensive price tags, bananas and other pieces of fruit were taped to the back of every sign they held, and everything was available for sale to the highest bidder.

The end of the King Mango Strut was an homage to parades of the past, offering an emotional finishing touch on yet another successful year. First came the Marching Freds, a dwindling group of men named Fred who have participated since the parade’s inception more than three decades ago. Following them was a large mix of marchers and attendees honoring the memory of retired Miami-Dade firefighter Michael McFall, a faithful strutter for 30-plus years who passed away in August. Kilt-clad bagpipers playing “Scotland the Brave” alongside the group turned the spectacle from a simple memorial segment to a unifying moment for all lovers of the King Mango Strut, regardless of when they were introduced to it.

Moments such as those have become fewer and farther between as those who’ve been involved with the parade for decades move on, move away, or pass away. As a result, love and community support of the King Mango Strut has become increasingly important in preserving one of Miami’s wackiest institutions as the city continues to change around it.