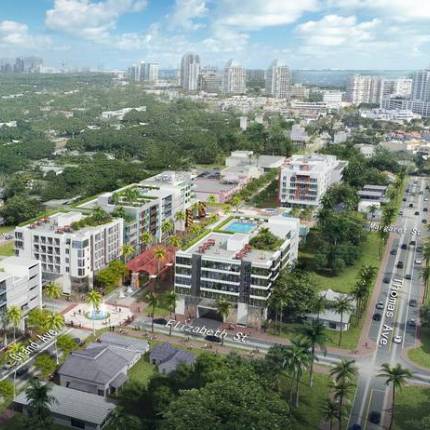 A Chicago developer who’s built a handful of small projects in Little Havana and Coconut Grove in the past four years says he has now nailed down one of the most elusive and significant real estate deals in Miami: The redevelopment of a chunk of Grand Avenue, the distressed core of the historically black and Bahamian West Grove.

Ricky Trinidad, president of Metronomic, Inc., said in an interview this week that he has signed a $25 million contract to purchase some 15 lots along Grand. He said he plans to launch construction on the lots, which occupy most of three adjacent blocks, soon after the deal closes early next year.

The properties had long been tied up in litigation that foiled attempts by other developers to tackle redevelopment of the corridor connecting affluent Coral Gables and the well-to-do, mostly white Coconut Grove. Trinidad said the legal disputes blocking the land sale have been resolved, though that could not be independently verified.

Trinidad’s $74 million, ambitious blueprint calls for 13 buildings, including a hotel, offices, a micro-unit apartment house, a mix of affordable and “deluxe” rental apartments and shops. A permanent farmer’s market would be set in a grove of trees where an organic market now takes place on Saturdays.

The buildings would be capped at five stories, the limit under current zoning. One roof would be designed to accommodate drones capable of ferrying people that are now under development once they are approved for use, Trinidad said.

But will Trinidad’s plan save the West Grove or drive a stake through the heart of what’s left of the struggling community? And can a developer who acknowledges he has never done anything this big even pull it off?

Those are key questions that Trinidad, who is virtually unknown in Miami development circles, is likely to face as he moves forward with Grand Plaza, as he’s dubbed the project. Trinidad previously announced Metronomic Place, a 44-room boutique hotel to be built on the site of an old gas station on the corner of Grand and Margaret Street, across from a CVS. That block, adjacent to the informal boundary between the West Grove and Coconut Grove’s commercial village center, would now be the easternmost piece of the Grand Plaza project.

The Metronomic assemblage represents a significant piece of Grand Avenue, once the lively and sometimes raucous main street of one of Miami’s oldest neighborhoods, a segregated district founded by Bahamian settlers in the 1880s. Once lined by inexpensive apartment buildings, the avenue today is mostly vacant after most of the slum dwellings were demolished and residents evicted over the years.

As one of the largest stretches of developable land in Miami that’s also bordered by wealthy neighborhoods, Grand Avenue has also long been the target of developers. They see it as a chance to revive a downtrodden area — and a potential gold mine if enough land can be assembled to create a comprehensive project. But previous attempts have been thwarted by patchwork land ownership and opposition from West Grove residents fearful that redevelopment would accelerate gentrification and displacement.

The Metronomic project would require demolition of four of the last remaining occupied apartment buildings on Grand and the eviction of 80 families, Trinidad said. Because the tenants are on month-to-month leases, Trinidad said, legally they would have just 15 days to find new places to live.

In an initial interview, Trinidad, who styles himself as a socially oriented and “culturally sensitive” developer, said he had not decided whether to offer assistance to the families to be displaced. Because there is little available cheap rental housing left in the West Grove and those who have been forced out previously are impoverished, virtually all have had to leave the neighborhood, according to activists and city officials.

But in a subsequent email, a spokeswoman for Trinidad said that the developer has agreed to work with Miami-Dade County Commissioner Xavier Suarez and Miami Commissioner Ken Russell, whose districts include the West Grove, to coordinate moving assistance and services for the families. Trinidad also said he will put those residents who wish to return at the top of his list for the 40 affordable apartments he pledges to build on Grand.

During the interview, Trinidad said the standing buildings are classified as unsafe and represent a hazard for residents.

“Our job is not to displace people,” he said, but added: “We won’t own those buildings and be slumlords. It’s not healthy for them or their children. These families should not be living there. It’s not contributing to the community. I think we’re saving lives.”

Because Trinidad has not publicly announced the project and has submitted plans to the city only for the hotel building, public officials and West Grove residents are unaware of what it entails.

One community leader said Trinidad should reach out to West Grove residents and explain his plans. Many in the community are already fearful of gentrification that’s rapidly advancing into the neighborhood from the central Grove.

“Yes, we need affordable housing, but still there is the feeling we’re getting pushed out,” said Clarice Cooper, president of the Village West Homeowners and Tenants Association, the largest organization in the neighborhood. “He needs to bring this to the community.

“If you’re going to come in here, we can’t fight you to death. But you’ve got to do something for us as well,” said Cooper, a lifelong West Grove resident and descendant of Bahamian settlers. “People are going to be displaced. It has to be for the greater good, not just for a few people. What will he do to preserve the feel and the architecture of the community? Otherwise, we just lose the whole flavor of the neighborhood.

“We figure our days here are numbered, but we want to preserve this community as much as possible.”

Community opposition helped derail a previous and even more extensive blueprint for Grand Avenue by Grove developer and investor Peter Gardner. That plan would have covered six entire blocks, including the properties Trinidad is assembling, with a mix of apartments and townhomes, shops, offices and a supermarket.

After years of planning and more than 100 community meetings, Gardner won city approval in 2010. But he could not obtain financing amid an economic collapse that put an end to his plans. Though public records indicate he retains ownership of a couple of lots west of Trinidad’s assembly, he never closed on purchase of the rest of the six blocks. Gardner’s blueprint had offered 40 affordable rental apartments, the same as Trinidad is proffering. But that number was rejected as insufficient by community leaders at the time.

The partners who then owned most of the properties, meanwhile, were enmeshed in legal infighting for years. Developer David Martin’s Terra Group offered $35 million for the full portfolio of properties in 2016 but could not seal the deal amid the litigation.

The impasse began to lift a year ago, when six lots were purchased in bankruptcy court for $5.4 million by a partnership that includes well-known Miami mutual fund manager Bruce Berkowitz. He vacated and demolished a set of small apartment buildings on the properties, though he stressed he did not charge tenants rent for months until the evictions took place.

Berkowitz said in an interview this week that he had hoped to join with other contiguous property owners to create a low-scale “village” that would benefit West Grove residents and complement the neighborhood’s ambience. But he said he couldn’t forge an agreement and decided instead to put up the lots for sale.

Trinidad confirmed the Grand Avenue properties owned by Berkowitz’s B&B partnership are part of his pending purchase. The balance of the properties were owned by the formerly feuding partners, whom Trinidad said have settled their dispute. A former principal of that group, Julio Marrero, did not return a phone message seeking comment.

If it goes through, the purchase would be a coup for Trinidad, who said he came to Miami seeking new development opportunities after the end of the recession. Trinidad worked in the Chicago area for 20 years previously. According to materials he provided, he had a modest track record there for developing several small urban infill projects and consulting on others.

According to press reports, Trinidad also participated in a pair of more-complex real estate proposals that appear not to have panned out. One was a plan to redevelop an industrial district in Rockford, Ill., and another a proposal to build an indoor extreme-sports center featuring a simulated sky-diving free-fall in Hobart, Ind.

He founded Metronomic in Chicago, but sold it to investor David Helmrich, who in turn hired Trinidad to run the firm. Trinidad said he does not have an ownership stake in Metronomic but has lined up private investors to provide project financing.

In Miami, Metronomic finished a six-unit townhome-style apartment building in Little Havana, Villas Beny Moré, and is building a second, the 16-unit Plaza Celia. It’s also nearing completion in Coconut Grove of two upscale apartment buildings on Bird Avenue and is building several single-family homes in the neighborhood. His plan to build a boutique hotel on a narrow parking lot on Commodore Plaza in the village center is in permitting.

In addition, Trinidad said, he is developing several co-living buildings targeted mainly to students at Miami Dade College Interamerican Campus in Little Havana and has acquired properties for as many as two dozen other infill projects.

Trinidad said he is confident he can build the Grand Plaza project. He hopes to tap into federal and state funding for the affordable housing component. Architectural drawings by Pablo Burgos of Burgos Lanza & Associates and Carl Levin of CLAD are already underway, he said.

He said Metronomic can deliver quickly and less expensively than other developers because it has an in-house general contractor and buys its own materials, saving time and money. Trinidad said he has assembled a capable, experienced and hardworking team. He also noted that the project consists of a series of small buildings, something he has ample experience developing and constructing.

Asked why he thinks he can succeed where others have flailed, he ticked off several elements: “The team that we have put together. The political support we’re getting. The vibrancy we’re going to bring to the neighborhood. Our design,” he said.

Then he added: “This is not rocket science, by the way. These small buildings are not hard to build.

“What’s new to us is doing it all simultaneously.”