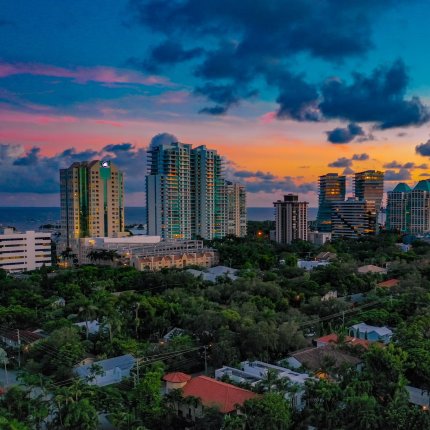 Miami evokes images of glitz and bacchanalian behavior, with champagne sprayed rather than sipped, but the newest enclave to gain of-the-moment buzz — Coconut Grove — is far less flashy than South Beach, more lush and scenic than Wynwood, and very much in demand.

‘This is the area you’ve got to be in; it’s not all bottle-popping,’ ” recalls L.A. native Phillip Frankland Lee, who just opened an outpost of L.A. and Montecito raw fish mecca Sushi by Scratch in the village.

Coconut Grove had a prior moment in the ’90s, but the crowds that came to its central area, Coco Walk, were dining at chain restaurants like Fat Tuesday and The Cheesecake Factory. Now it has undergone a $150 million redevelopment with office space, boutiques, health and wellness options, movie theaters and elevated dining added. Two of its restaurants — Ariete and Los Félix — have garnered one-Michelin-star ratings.

Coco Walk is just a block off Biscayne Bay, and the area has a canopy of trees. “It reminds me of Bangkok; very tropical with lots of stone, and it’s become sophisticated without being over-the-top showy,” says Frankland Lee. “It’s low-key, but there are homes across the street from our restaurant going for $18 million.”

The area —where Madonna, Derek Jeter, Sylvester Stallone, Christian Slater and LeBron James have owned homes — had a sharp rise in home prices during the pandemic, like so many other places in Florida. At the end of November, the median sales price of a home was $2 million, up from $1.57 million in 2019, according to Lourdes Alatriste of Douglas Elliman. Big sales there last year included the $107 million sale of The Arsht Estate.

Hospitality and condos are part of the renaissance. Just before the pandemic, the Ciprianis opened chic hotel Mr. C Miami (where Jennifer Lopez has checked in and rooms start at $464 night), and are constructing Mr. C Residences.

The Ritz-Carlton Coconut Grove (rooms from $599 a night) has updated its restaurant and hired a new chef at its Isabelle’s Grill Room & Garden. The Mayfair House Hotel & Garden has finished a $50 million renovation, with rooms meant to feel like individual homes, and its new Mayfair Grill celebrates wood-fired dishes from Southern California, Arizona and New Mexico. Designer Silvia Tcherassi presented her pre-fall collection at the Mayfair during Art Basel late last year.

“There’s been a shift because of the redevelopment, and there are more families and people with high net worth,” says Christopher Cuomo (not the journalist), a partner in Groot Hospitality, which owns restaurants and nightspots in Miami and just opened The Key Club, overlooking Biscayne Bay, in Coconut Grove. First-night guests included David Beckham, Pharrell Williams and Lenny Kravitz.

Groot is not the only hot restaurant partnership that spotted the wave and jumped in. Major Food Group, owners of Carbone, opened a location of its all-day-breakfast concept Sadelle’s in late 2021, and Grove Bay Hospitality (Stubborn Seed) premiered the waterfront Bayshore Club last summer.

“Grovites” insist, though, that the village is still a bucolic community. Says Ariete owner Michael Beltran: “Even though there is so much new here, Coconut Grove is really old school. You can walk everywhere. It’s the last small town in this big city.”