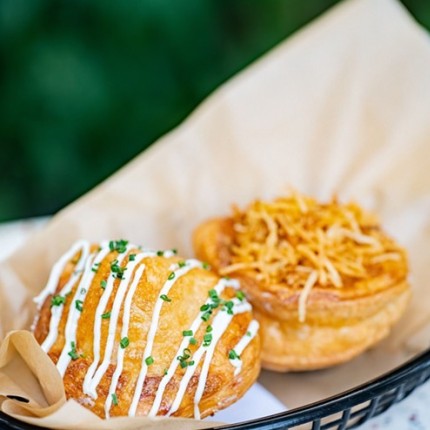 First they hooked you with pastelitos stuffed with fritas or peanut butter and jelly.

Chug’s is a new Cuban-American diner by the Little Havana-raised owner of Ariete, the three-year-old Coconut Grove restaurant with local and national acclaim. This new spot in the former Akashi space and the short-lived revival of the Bookstore in the Grove, will be a mashup of American diner staples and simple Cuban favorites.

All of the dishes will be filtered through the experiences of chef-owner Michael Beltran. He studied under Norman Van Aken, one of the great innovators in American cuisine, and James Beard award winner Michael Schwartz.

But he also studied under his abuelita.

“We want it to feel very family-ish,” he said.

Chug’s will be the kind of place serving all-day breakfast. Abuela’s Breakfast is fried eggs over white rice, with black beans and fried, sweet plantains. Pancakes are made in cast-iron skillets. They’ll have French toast sticks and even a Taylor ham breakfast sandwich, with a fried egg and house-made potato sticks on Cuban bread.

Of course, there will be cafecitos, cortaditos and café con leche, but made with coffee from quality roasted beans.

Just inside will be a nod to the ventanita, Miami’s ubiquitious Cuban-coffee walk-up windows. Croquetas will be stuffed with classic ham or short rib. And the pastelitos, innovated by his sous chef Gio Fesser (who goes by the Intagram handle Pastelito Papi), are stuffed with novelties. Think buffalo chicken, baklava or a pastelito version of a Cuban sandwich.

Fritas, of course, will be served. Beltran introduced them for $5 at Ariete. At Chug’s, you’ll find his version of the classic (chorizo, papitas and ketchup on potato bread), Pop’s (with blue cheese and caramelized onions) and Americano (covered in American cheese, bread-and-butter pickles and what he call’s Chug sauce).

Pressed sandwiches also will be part of the menu. A pan con lechon roast pork sandwich and his version of a Cuban sandwich using duck confit will set his creations apart from the classics. Also expect a fried fish sandwich — with the tail on, as tradition demands.

And for dessert, there’s a twist on the classic flan with goat milk and cajeta caramel — different from the flan at Ariete, notable for using maple-syrup flavored candy cap mushrooms.

Heartier plates, like pork milanese and rabo encendido ox tail, will be served with a banana on the side — just like Abuelita served it.

“I mean, how else are you supposed to eat that?” Beltran said.