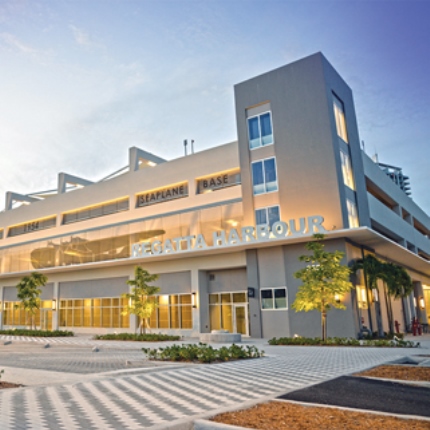 Regatta Harbour, the mixed-use development at the helm of Coconut Grove’s waterfront revitalization, has attracted a notable tenant.

The bank is relocating its storefront from 2665 S Bayshore Drive to the western end of the new Regatta Harbour Parking Garage.

Located at 3385 Pan American Drive, Wells Fargo will encompass 2,373 square feet and is expected to open its doors in the summer.

The bank says the move will provide Grove residents and businesses a heightened level of convenience for banking needs in the neighborhood. Services will include banking, investment and lending.

The Wells Fargo news comes on the heels of a recently-inked lease with Anatomy Fitness, a fitness program that integrates exercise with sports science, wellness and beauty.

The City of Miami celebrated the opening of the new municipal parking garage with its foundation of commercial uses in August 2020. The facility is owned and operated by the Miami Parking Authority.

Currently under construction, Regatta Harbour is being delivered in multiple stages. The first phase was completed in 2019 with its marina, following a $5.5 million overhaul of the former Grove Key Marina site, according to the developers.

“As construction continues to move forward on schedule, Wells Fargo will join our growing collection of popular retail brands that we have purposefully cultivated,” said Eduardo Garcia, principal of The TREO Group.

“The addition of this multinational financial service company makes our waterfront destination even more seamless as a central place for visitors to share and enjoy a dynamic mix of experiences that fit their many needs.”

Slated for completion this year, Regatta Harbour is poised to transform the area’s bayfront with an amenity-rich, “Play by the Bay” destination, the developers said.

The Arquitectonica-designed development will present a community centerpiece with more than 100,000 square feet of entertainment, retail and restaurants, accessible by land and sea along the Grove’s historic Dinner Key.

Regatta Harbour’s 9.5-acres is a neighbor to the historic Miami City Hall and the city’s Regatta Park. Regatta Harbour will preserve and renovate historic airplane hangars utilized in the early 1900s as the first continental Naval air station, and later by Pan Am Airways.