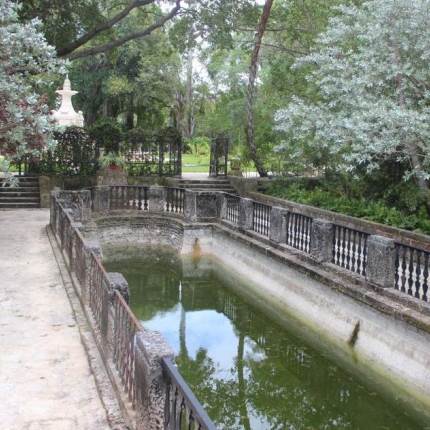 For nearly 25 years, the Marine Garden at Vizcaya Museum and Gardens has remained closed to the public.

First, Hurricane Andrew damaged the garden in 1992, and then Hurricane Wilma passed through in 2005, bringing floods and destruction to one of the most vulnerable gardens on the estate.

Any museum guest, regardless of membership, can see the garden.

“It’s pretty exciting for me because it’s always been very sad for me to see that garden blocked off,” said Ian Simpkins, the deputy director for horticulture and urban agriculture at Vizcaya.

The garden, located at the far southeast side of the gardens directly behind LaSalle High School, used to serve as the connection between the estate’s formal gardens and lagoon gardens. Also called the Peacock Garden, it was known for its ornamental peacock columns — now in storage or in the process of being replaced — and two decorative pools, which original owner James Deering designed for housing both exotic tropical fish and fish he caught for dinner.

Bill McDonald, who has been a tour guide at Vizcaya for the past six years, remembers hanging out at the bridge by the Marine Garden after lunch as a student at La Salle in the 1960s. While he didn’t know its significance then, McDonald said he now appreciates the history of the garden.

“It’s such a unique part of Vizcaya, and it was really significant when Vizcaya was in its full glory,” he said. “It’s going to be great to actually show it rather than say, ‘It’s over there behind that fence.’”

The garden’s low elevation made it easily susceptible to flooding, Simpkins said, and the two hurricanes destroyed railings, cobblestones and left silt and debris behind. It had to be dug out by hand after Hurricane Wilma.

Initially, in 2009, Simpkins said, Vizcaya staff looked into completely restoring the garden — a project that would’ve cost close to $2 million today. The idea was then set aside.

But when Vizcaya was chosen as the host site for the American Public Gardens Association National Conference in June, it became a catalyst for the garden’s repair. In May, work to stabilize — not restore — the garden began in order to allow for visitors and regular maintenance.

“We made it safe so it’s no longer presenting as an abandoned garden, but more as a ruin that visitors can walk through and experience,” Simpkins said.

The garden will eventually be restored as part of a larger garden restoration project in the near future. But for now, only repairs were made — plants were trimmed, railings were replaced, and walls were reinforced.

“We felt it was important for the garden to present itself as a romantic ruin, which is really the aesthetic of the entire garden,” Simpkins said.

David Hardy, a historic landscape specialist at Vizcaya, helped repair the plants. For him, the garden is another special part of the estate for the public to appreciate.

“It was like one limb was missing from the garden,” he said. “Now I feel that our whole garden is together again.”

Yaisa Batista, 27, and Robert Jarden, 23, wandered through the garden last week as they took pictures and admired the plants. They couldn’t believe, Jarden said, that it had only just reopened.

“We just saw that it was open and wanted to go in,” Jarden said. “It’s definitely unique and really beautiful.”