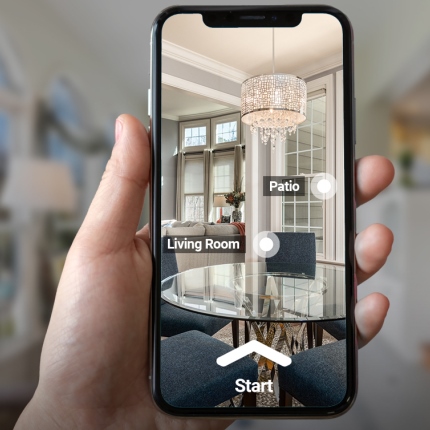 It’s a Sunday, a day when home shoppers would normally pack open houses. Luke Smith arrives solo to a Redondo Beach, Calif., listing, angles his laptop toward the front door so its camera can capture the scene and enters the two-bedroom condo.

“This property is listed for $819,900,” the real estate agent for Rex tells his client, a video director who is 30-plus miles away watching on his own computer in a Beverly Hills apartment. “One of the first things you will notice when you do walk in is that breeze. I have that patio door open.”

The novel coronavirus has shut down large swaths of the U.S. economy, leading to millions of layoffs and the closure of bars, malls and events. And it has slammed the real estate industry. Applications for loans to purchase a home have plunged, and deals are falling out of escrow.

But sales activity hasn’t completely stopped, at least not yet. Those who are determined can still buy a home. They just have to navigate the strangest market ever.

From the state on down, California governments have issued stay-at-home orders but deemed aspects of the real estate industry essential. That has allowed home sales to continue in an increasingly complicated fashion.

Traditional open-house viewings are banned in California. Some buyers are touring houses virtually or taking part in individual showings with agents who stand six feet away.

Appraisers are conducting more drive-by-valuations, and buyers are watching inspections via video call.

If you are ready to close, a masked and gloved notary may show up to your doorstep to get signatures that must be completed in person.

“This is what it looks like during these times,” software salesperson Spencer Gattinella said in a text, while sharing a photo of him and his wife in masks, signing the paperwork for a five-bedroom San Clemente house on a pop-up table in their current driveway.

Many people were searching for a home before the coronavirus was an issue. Now, along with their agents, they are feeling their way through rapidly changing rules.

“Everybody is trying to figure out what to do,” said Tregg Rustad, a Los Angeles agent with Rodeo Realty. “How can we do this responsibly, how can we be safe, how can we not spread anything?”

Elizabeth Morrison had been looking about a year for a house in the Los Angeles area when Gov. Gavin Newsom issued his stay-at-home order.

The San Fernando Valley renter long wanted to stop paying “someone else’s mortgage.” And even though the coronavirus outbreak mostly wiped out her industry – she’s a vice president for a major live events company – she was hoping her employer would bounce back after only a temporary rough patch. She was still interested in buying, even hopeful that with the market seizing up she might find a deal.

Morrison started touring homes virtually. She found a house she was willing to see in person, a fixer-upper in Los Angeles’ Crenshaw district. Donning a mask and gloves, and staying six feet away from the real estate agent, she visited the house two weekends ago.

She got in just under the wire. A few days later, Los Angeles added “in-person showings of housing for lease and sale” to its list of banned activities – a move that will probably freeze the market further.

“I would never buy a home for almost a million dollars sight unseen,” said Morrison, whose $750,000 offer was ultimately accepted. “It’s too big of an investment.”

The city of Los Angeles appears to be the only local entity yet that has gone that far, according to the California Association of Realtors – which means, given the maze of local municipalities, some shoppers need only expand their search if they want to see a place in person.

Walk just a block from the home Morrison is buying, and you’ll find yourself outside city limits in an unincorporated county area.

Lotus Lou, a spokeswoman for the California Assn. of Realtors, said the county’s rules, along with the state stay-at-home order, allow in-person showings as long as stricter local rules don’t ban it and social distancing is practiced.

The Realtors say there should be no more than one agent and two other people in a house at a time. And there should also be a warning.

“Sellers and buyers must be expressly made aware of the risks of showing and visiting properties: that it may be dangerous or unsafe and could expose them or others to coronavirus,” the group said in recent guidance to members.

Alex Comisar, a spokesman for Los Angeles Mayor Eric Garcetti, did not respond to questions about whether consumers could tour a home in the city for sale or lease by themselves without an agent.

The state Department of Public Health said it “supports the actions being taken by Realtors to enforce physical distancing during this time.”

The county health department on Monday confirmed that in-person showings, where people practice social distancing, are indeed allowed in areas covered by its order. But separately, as the death toll mounted, county officials urged people to avoid going outside this week and even refrain from shopping, if they have enough supplies.

Morrison said she felt relatively safe during her tour, noting that she followed the guidance of the time. But if her deal falls through she wouldn’t want to see another house in person, even in places where it’s allowed.

“It’s more terrifying every day,” Morrison said, noting that the understanding of how the virus spreads and who is at risk seems to change constantly.

Although few probably would purchase a home without stepping inside, Smith, the Rex real estate agent, said it’s possible to put down an offer that’s contingent on eventually seeing it.

The new environment is also placing a premium on vacant homes, said Suzanne Seini, chief operating officer of Active Realty, which has offices in Corona, Irvine and downtown San Diego.

“There are buyers who are not even interested in going in a seller’s home right now” if they still live there, she said.

Some sellers also aren’t interested and are pulling their homes off the market. Part of that is safety, but it’s also because selling into a crazy, declining market isn’t the best strategy unless you have to.

Firm home-sale and price data won’t be available until later this month, at the earliest. But early measures show the market is turning.

Applications for a mortgage to buy a home fell 17% during the week that ended March 27 in California. That followed a 23% decline a week earlier, according to the Mortgage Bankers Association.

Redfin said asking prices for newly listed homes in the U.S. have also started to dip.

Sellers who are willing to have someone in their home are asking agents to bring only people who are serious about pulling the trigger, said Sean Sadri, an agent with Active Realty.

Sadri said he is already restricting in-person tours for prospective shoppers on his own – a decision he can make because, like most agents, he’s an independent contractor.

“If it’s just someone looking for a home who’s on the fence … I am not going to put myself out there,” he said.

Others have less flexibility. A salesperson for a major home builder in Southern California said he’s required to show homes to whoever shows up unless they have COVID-19 symptoms or know they have been exposed to someone with the disease, even if they are months or years away from buying.

“Being around any more people than I have to scares me,” said the employee, who asked for anonymity because he feared retaliation from his employer. “What are we doing calling selling homes essential?”