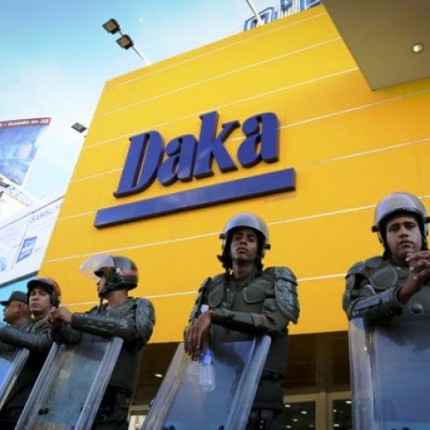 Venezuela President Nicolás Maduro’s crackdown on retailers has increased the urgency for Venezuelan business owners to move their money to South Florida, if they’re able to.

The government takeovers of businesses started under late President Hugo Chavez, and that contributed to major flight capital and immigration to South Florida. Now it appears to be accelerating under Maduro. Venezuelan soldiers recently seized the Daka electronics chain because the government said their prices were too high. Five store managers are being prosecuted for “unjustified” price increases. Other retailers are being investigated for their prices. It appears they must either lower them, or face a fate similar to Daka. Check out this video posted by Hoy Noticias. That’s not Black Friday shopping. Those are looters in Venezuela cleaning out an unguarded Daka electronics store.

This is going on at a time of 54 percent annual inflation in Venezuela, meaning bolivars left in bank accounts there are rapidly losing value. Many household goods are in short supply, including milk, sugar and even toilet paper. Like much of what happens in Latin America, this economic crisis has a ripple effect on South Florida’s shores.

More than $150 billion has left Venezuela during the last 10 years of currency controls, with the Miami area being the largest recipient, said Jaime Ortega Jr., senior VP of global banking at Miami-based Apollo Bank. Over 200,000 Venezuelans live in South Florida, he estimated. Ortega said the new twist of a retailer crackdown has added to the reasons why Venezuelan business owners would want to ship their money to Miami. “A lot of people would like to get the hell out but it’s not that easy,” Ortega said. “It has become increasingly hard for Venezuelans to take money out of their country.”

Regulations in the United States make it difficult for banks to accept offshore funds without a documented source, Ortega said. He noted that buying Florida real estate is one way to get around such scrutiny.

Some Venezuelans are literally wearing their money out of the country by purchasing gold and gems and flying into Miami with them on their persons, said Jim Angleton, president of Miami Lakes-based Aegis FinServ Corp., a diversified financial company that issues pre-paid debit cards around the world. They wear gold ropes underneath their clothes and sell them at Miami pawnshops, he said.

Those who are stuck with bolivars are trading them for dollars with Venezuelan ex-pats in Miami and Panama who serve as “unofficial banks,” Angleton said. Some Venezuelan businesses turn to virtual currency like bitcoin or use pre-paid debit cards to borrow against, he added. “We think it’s really going to kick into high gear,” Angleton said of the Venezuelan flight capital. “You will start to see more Venezuelans coming here buying more real estate. There will be immediately sellouts of all planned communities in Doral.” However, an impediment to fleeing for some Venezuelans is the inflation of the bolivar that has made flights from Caracas to Miami much more expensive, Ortega said.

Frank Mora, director of the Latin American and Caribbean Center at Florida International University, said trips to South Florida by middle-class Venezuelans will become unaffordable, but its wealthiest residents who can afford air travel have greater urgency to leave because the economic crisis there is deepening.

“These medium-sized businesses are likely to close,” Mora said. “It’s not profitable for them with the exchange rate what it is and the price controls. It’s not a business friendly environment, much less so than a year or two ago.” The latest escalation should cause another wave of capital flight from Venezuela to South Florida, although it probably won’t be as big as what occurred about five years ago when many wealthy families fled Chavez, Mora said.

Gustavo Pena was an attorney in Venezuela and left about 10 years ago after Chavez made things difficult for his family’s newspaper and his father dodged attempts on his life. He said Maduro is trying to look like Robin Hood fighting capitalism and profiteering as municipal elections approach. It reminds him of what happened in Cuba.

“The more the government takes control of the private sector everyone who has an interest in Venezuela will leave the country,” said Pena, a partner of Coral Gables-based professional services firm Ascendo Resources. Pena cautioned that many Venezuelans in South Florida who are making their livings off of companies in their homeland could see their income suffer. That means they will spend less around town here.

Fort Lauderdale attorney Michael L. Feinstein, represents many Venezuelan clients who had their businesses taken over by the state during the Chavez years. They were allowed to keep a minority stake in the companies, but the government has been extremely slow in sending them their share of the profits, he said. Many Venezuelans in South Florida start small businesses, especially restaurants, gas stations and car washes, Feinstein said. “You will see another influx of Venezuelan people come to Miami and shelter what they have here instead of having their businesses taken over by the government,” Feinstein said.

The key for Venezuelans is to move their business interests to the United States before they go broke, Pena said. “The people with cash and money to invest and have possibility to take their money out will start buying items outside, including in Miami, to keep their money’s value,” Pena said. “If you get a dishwasher, that money isn’t diluted but if it’s money in the bank, it’s losing value by the day.” That could translate into all kinds of Venezuelan purchases in South Florida, Pena said, from diamonds to real estate.

FIU’s Mora said Venezuela’s government has severely limited the supply of dollars so retailers looking to exchange bolivars for dollars in order to purchase foreign-made goods must use the black market, which is even more expensive. This is why prices are so high and inflation is out of control, he said. “It is impossible to import and sell at a profit in Venezuela because the government will force you to sell your TV at what they think is a fair price,” he said. That means that South Florida exporters will have a difficult time selling products to Venezuelan companies, Mora added. Ortega said that few banks would finance trade with Venezuela given the currency problems with the bolivar.

Venezuela was Miami’s fourth-largest trading partner in 2011 at $6.7 billion, according to the U.S. Census Bureau. Exports accounted for 78 percent of that trade. Pena believes there will be a huge market to export products to Venezuela because few goods are manufactured there. However, exporters will probably have to sell to the Venezuelan government or the few government-sanctioned companies to distribute the products. “You would rather export 100 dishwashers and sell them and then you are out,” Pena said. “You don’t want them housed in retail in Venezuela.”