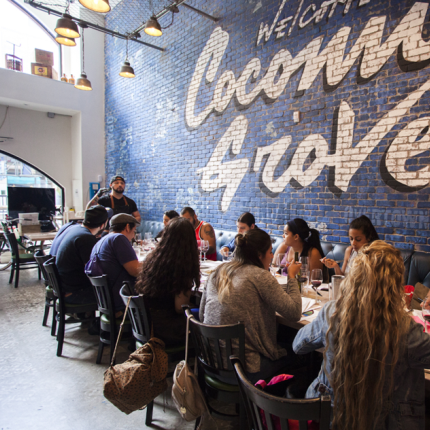 Kush is spilling into The Spillover. And owner Matt Kuscher hopes it’s a marriage made in food-and-beer-and-cocktail heaven.

Kush Coconut Grove opens next week, June 17th at 2911 Grand Ave., as a mashup of two of Kuscher’s properties (he also owns Lokal, Vicky’s House, Stephen’s Deli and La Cocina). The new spot’s look and menu will incorporate elements from both restaurants.

Mostly what you’ll see is that Kush attitude.

“We’re combining them and making the place edgier and more casual,” Kuscher says. “It will be more fun, more Dade County, more in your face. It’s a whole rebrand.”

The menu will include items from both restaurants, with emphasis on the more affordable options.

“We didn’t want 25 or 30 dollar price point,” he says. “Now isn’t the time to have those things. It’s not what people are looking for right now.”

What are they looking for? The Spillover’s fish sandwich, crab cakes and grouper reuben and Kush’s chicken and waffles. Also: that beloved frita that made Kush Wynwood famous.

Kuscher says he has a soft spot for the Grove.

“It’s in the city of Miami, but it’s its own little neighborhood,” he says. “Our clients here have been good to us. The people in this neighborhood love quality. We’re hoping they love ours.”