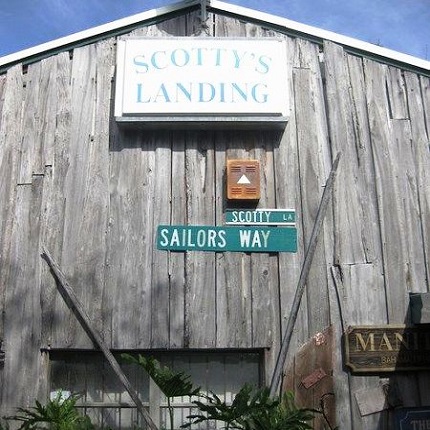 For many long years, Scotty’s Landing hung on as one of Coconut Grove’s favorite, not-so-secret spots in which to while away the hours.

Tucked away behind a marina, Scotty’s nurtured a shaggy-dog, old-Grove ambiance that is rapidly disappearing elsewhere. With plastic chairs under a tarp and a big banyan tree, famously so-so food, live music on the weekend and a panoramic close-up view of Biscayne Bay, it was a good place to bring friends and your hound and relax with a beer or two. Or three. No more.

The watering hole — also known in a relatively brief, late incarnation as the Grove Bay Grill — is about to meet its long-ordained fate.

Closed last year though still standing, the old Scotty’s — or what’s left of it — will soon be demolished to make way for a glitzier set of bayside restaurants that are part of a city-driven, voter-approved plan to remake the publicly owned Grove waterfront. 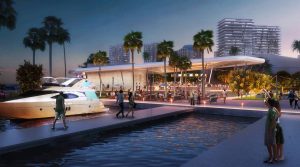 An architectural rendering shows the planned new open-air, casual dining spot that will replace the old Scotty’s Landing as part of the larger Regatta Harbour project on the Coconut Grove waterfront. (RENDERING CREDIT: THE TREO GROUP)

By the end of this year, though, the developers who won the bid to rebuild the marina and the shoreline promise to open a replacement that, like the original, will be informal and chill. And, yes, it will be housed in a sleek design by Miami’s Arquitectonica, several yards south of the original’s location. But in an echo of its predecessor, the new Hangar 42 will consist mainly of a big overhanging canopy and an open-air deck below it hugging a new baywalk. Patrons may also notice some other upgrades.

“We do encourage people in flip-flops to come with their dogs and hang out,” said Eddie Garcia, a principal at The Treo Group, which is managing the project. “But we won’t have plastic chairs. And everyone will be happy with the food we’ll be serving.”

The adjacent marina has continued to operate without interruption, as required by Treo’s agreement with the city. The coming transformation is the belated result of a decision by the city of Miami to seek new bids for the lease for seven acres of historic Grove waterfront abutting Miami City Hall and Dinner Key. Scotty’s operators submitted a bid for the new restaurant and marina lease but lost out to Garcia’s group.

Miami voters easily approved the proposed makeover and bid award in 2013. But the start of work was delayed by two years of litigation by a business competitor and Grove activists fighting what they saw as flashy overdevelopment. That was compounded in 2017 by damage from Hurricane Irma, which Garcia said destroyed the marina’s docks and much of its seawall.

Construction began in earnest only last year, which saw completion of a new seawall, new floating docks and the consolidation of the marina’s boat-storage racks, formerly arrayed in separate sections, into one side of the site. That consolidation will allow for a new scenic promenade from South Bayshore Drive to the waterfront, something the old marina layout blocked. The developers also demolished the closed Chart House restaurant that stood on the waterfront just north of Scotty’s.

Now they’ve started on renovation of a pair of massive, historic airplane hangars on the site. The hangars, which date to the 1920s, once housed the magnificent “flying boats” that Pan American Airways flew from Dinner Key to Havana in the 1930s.

“In a plan approved by the city’s historic preservation office, the structures, now stripped nearly to their steel skeletons, will be reinforced and re-skinned in metal to their original look,” Garcia said. “One will be used for boat storage, and the other as retail space.”

A companion project — a new, low-slung public parking garage between the site and South Bayshore Drive along Pan American Drive — is meanwhile now almost complete. Though the garage was financed and built by the city’s parking authority, Treo Group contributed over $3 million towards construction as part of its agreement with the city. The developers will also build out, lease and manage its 34,000 square feet of ground-level retail spaces.

“Half that space will be taken up by Anatomy, a ritzy fitness gym with branches in South Beach and Midtown Miami. Other leases are in the works for the balance of the space,” Garcia said.

Including the garage, the project newly christened as Regatta Harbour has a value topping $70 million, he said. Treo’s end of the project is backed by a $33 million construction loan. To highlight the site’s aviation history, screens covering the garage exterior bear images of the innovative Sikorsky S-42 seaplanes that were custom-built for Pan Am’s use. Hangar 42, the name of the planned new casual restaurant, is also a reference to the famed aircraft.

The Regatta Harbour name, meanwhile, is a nod both to the national and international sailing races that take place every winter just offshore of the Grove, and the adjacent Regatta Park, which serves as a staging area for the races.

“Work on the new casual dining spot will begin shortly,” Garcia said, “followed later by construction of a separate, two-story building with a second-story deck, on the former Chart House site. That second structure will house two upscale restaurants, a seafood spot called Afishonado, and a steakhouse, Cut + Dry. All three will be managed by the Grove Bay Hospitality Group, which also runs Glass and Vine in the Grove’s Peacock Park and Stiltsville Fish Bar in South Beach.”

Garcia said he and his partners expect to finish all construction and be fully up and running in 2021.

View the Miami Herald’s news video ‘Coconut Grove’s Waterfront Is Going Through A Makeover‘ below: