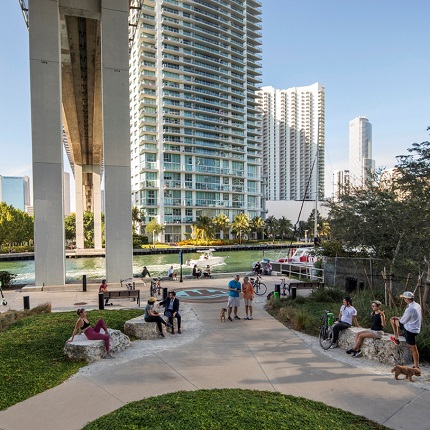 Miami has many remarkable public spaces, but none more iconic than The Underline, the 10-mile-long linear park below the elevated tracks of the Metrorail that runs from the Brickell neighborhood to the Dadeland area, in southern Miami-Dade county.

The ambitious project will cost 140 million dollars that will be paid with federal, state, municipal and private funds.

As it is such a large project, construction was divided into three stages. The first, which occupies the entire Brickell area, completed construction in February 2021, and is a neighborhood favorite. The second phase is underway and is expected to be completed by mid-2023. The third and final one is scheduled for 2025.

Among the stages already completed are urban gardens, basketball courts, bike paths and recreational areas with tables and stages for artists. For phase two, currently under construction, a linear park is planned that will also have recreational and sports areas, from Brickell to Coconut Grove. This phase was delayed mainly by two things: shortages in the supply chain that affected the entire country and a parallel construction project by FPL to bring the wiring that until now was aerial.

What is new in this mega-project has to do with the fact that the design of the third phase already started will join Coconut Grove, Coral Gables and South Miami.

Although The Underline complex follows a master plan made by the New York landscape architecture studio James Corner Field Operations (same behind the High Line linear park development in New York), final design and construction details are done locally based on resident requirements.

Miami-Dade County just began the process of meeting with neighbors to ask them what they would like to find in the park, since they will ultimately be the users. There are basic issues that are known to be there, such as a water storage and filtration system with plants to prevent flooding, or a dog park, which received a special subsidy of 22 million dollars. Depending on what the neighbors ask for, the park could have playgrounds for children, more stages for artistic performances or even a pickleball court, a very popular sport in Miami at the moment.

The park, even with only one phase completed, has already become central column of Miami, crossing a good part of the city from north to south. It is common for residents to use it for physical activity or as a meeting point. Even during the few months when the heat is not so intense in Miami, it is a must for outdoor picnic lunches.