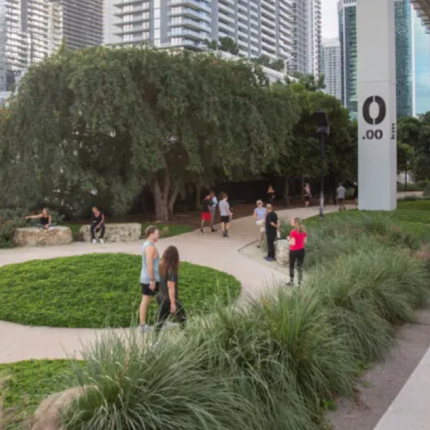 Until recently, the land under an elevated Metro line in Miami was little-used, wasted urban space. Now it’s becoming a park, with the first stage of the Underline—a 10-mile-long space for bikes and pedestrians in a car-centric city—having opened.

“It’s reimagining 10 miles, or 120 acres, of basically dead space below Metro rail,” says Meg Daly, founder of Friends of the Underline, the nonprofit behind the new park.

Eight years ago, after she broke an arm and couldn’t drive to her physical therapy appointments, Daly, a digital marketer, started taking the train and walking under the tracks. At the time, the path was neglected, dirty, and unwelcoming. But she recognized that it could be a valuable part of the city and started advocating for its transformation, working with partners to raise $120 million (to date) for the construction of a new park inspired in part by the High Line in New York.

The first stage of the Underline, stretching half a mile, includes green space with river views; butterfly gardens; recreation space with room for basketball, mini-pitch soccer, and a running track; tables for chess and other games; communal tables for dining; and a stage for community events. It also includes dedicated bike and pedestrian paths in an area where people might normally have chosen to drive, even if they were just trying to get to the train station.

In an early traffic study, the nonprofit found that by helping people walk to Metro rail instead of getting in their cars, the project could help take 5% of the local traffic off the road. That’s partly because it makes walking and biking safer; right now, many people may choose to drive because the alternatives seem too risky. Miami, like other cities in Florida, regularly ranks among the most dangerous cities in the country for pedestrian safety. Florida has the highest rate of pedestrian deaths in the U.S.

Miami residents can also get to the park without driving.

“You don’t have to have a car to get to the Underline,” Daly says. “As long as you have access to mass transit you can get here, and that’s very unusual for parks and for green spaces—a lot of times you have to drive there.”

The final project, which will be complete in 2025, will connect to a network of adjacent bike paths that create a 22-mile loop of off-road biking and walking paths.

The Underline became the fastest-moving project of its size in the country, and meant working with the county and state, as well as corporate donors and organizations like the Knight Foundation to get the necessary funding. There are also smaller donors and a team of volunteers making the effort possible.

And there are similar projects underway in other cities. Daly is part of the Highline Network, a coalition of planners and other advocates who meet regularly to compare notes about industrial reuse projects.

“Every week, someone’s calling and saying, ‘How did you do this? How can we do it?’ ” she says. “I think as our cities get denser, we have all around the country, if not the world, people looking with a different lens at land that was earlier not considered—below freeways, below bridges, or in this case, below an elevated train.”

As we talked, the construction fence around the new section of the park had come down, and people were already using the space. Daly interrupted herself to give an update as she looked out her office window next to the new path.

“Oh my God, I just saw our first jogger,” she said. “It’s amazing: People are already just walking on the Underline like it’s always been there.”