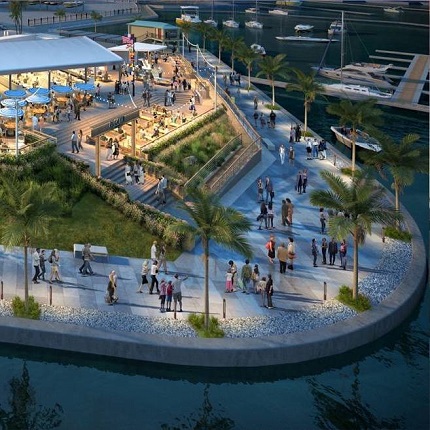 Coconut Grove has become a magnet for dining and entertainment.

The renovated CocoWalk, with such restaurants as Sushi Garage, Mister 01 Extraordinary Pizza and Groot Hospitality’s Key Club, draws crowds, as do the neighborhood’s two Michelin-starred restaurants, Ariete from Michael Beltran and the Mexican spot Los Felix. The giant Amal Mediterranean restaurant recently opened its rooftop bar Level 6, the popular Bodega Taqueria y Tequila is now serving tacos on Main Highway, and the iconic Mayfair House Hotel & Gardens has been brought back to life, with two restaurants and a rooftop bar.

Into this frenzy of growth comes Regatta, a new waterfront development from Breakwater Hospitality, the group behind The Wharf Miami and Wharf Fort Lauderdale, Carousel Club at Gulfstream Park in Hallandale and the renovation of the beloved Irish bar and restaurant JohnMartin’s in Coral Gables.

A rendering shows the outside of the Regatta, a planned development in Coconut Grove. Regatta is located at 3415 Pan American Drive and will open in 2023.

Located on the former site of the Chart House, not far from the Bayshore Club on the former Scotty’s Landing property and the Regatta Harbour development, the new Regatta project is designed by architect Jon Cardello from Cube 3.

The shape of the land announces its mindset: it resembles the bow of a boat, taking full advantage of the dazzling view of the bay. Emi Guerra, co-founder of Breakwater Hospitality, calls the project “the next evolution of our design for outdoor venues.”

Regatta shares similarities with The Wharf but will be different in many ways. The property, which is just under an acre in size, has the capacity to hold 981 people, with three bars and seating for 412. There will be yard games, but the food vendors will be more upscale than those at The Wharf, which leans toward the grab-and-go concept.

The vendors at Regatta will use five fully built-out kitchens and will be staffed with what partner Alex Mantecon calls “James Beard Award-caliber chefs.” Guerra and Mantecon aren’t announcing any vendor names yet — the project is still in the groundbreaking stage — but they’re hoping to maintain an aggressive building schedule, aiming for an opening sometime in the first few months of 2023.

With all the new development in the Grove and competition from old favorites like the nearby Monty’s, which celebrates its 53rd anniversary this year, can the neighborhood sustain another big venue? Guerra and Mantecon say based on their previous experience, the answer is yes.

“We have found that the venues we open that are this size mesh well with businesses nearby,” Guerra says. “It creates an atmosphere where people bounce around, and the businesses feed off each other. There are enough people for everyone to be successful.”

Mantecon agrees, citing the skepticism from businesses like Garcia’s Seafood, whose owner Luis Garcia was at first skeptical when The Wharf first opened on the Miami River.

“He was concerned at first, but a few months in, he told us sales were up,” Mantecon says. “The river had become a district, a place people wanted to come to. The same thing happened with The Wharf in Fort Lauderdale.” “We’re creating this venue around the location,” he adds. “Create the right experience and eventually the success will follow.”