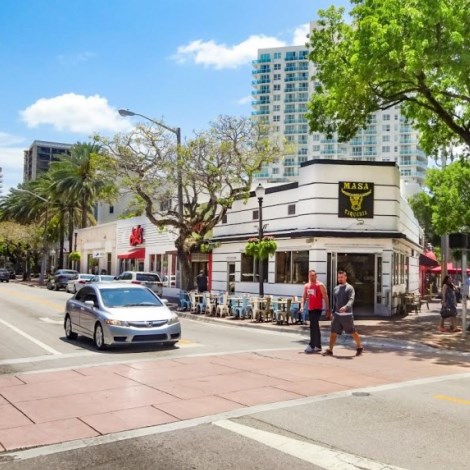 Grand Avenue is one of the most significant corridors in the Historic Village of Coconut Grove. It begins on South Dixie Highway and heads east to McFarlane, where some of the best shopping, dining, and entertainment are located.

Grand Avenue traverses the West Grove, which is also known as Village West. This very distinctive neighborhood was founded by Bahamians and has a long-established and proud history.

The time is now ripe for a major transition of Grand Avenue. Some refer to it as “gentrification,” while others feel it is inevitable, market-driven progress on which we can build a renaissance without displacing long-time residents.

Properties that have been kept in their original state, and buildings that have received minimum repair, are now more desirable than ever.

Recently, six properties were purchased by B & B Grove Properties LLC. The hope is that the new owner will appreciate the existing community and bring a new vitality of commerce, entertainment, and people to help improve the quality of life for all. It is also crucial that accommodations are made for long-time residents to have the opportunity to remain a part of the Coconut Grove community by providing affordable and workforce living facilities.

Working with Commissioner Ken Russell, and building on the success of Gibson Plaza (56 units), Commissioner Suarez has put on the drawing board the following projects:

1) Grand and Douglas: A top initiative in the Grove is to enhance the beauty and attractiveness of every intersection and streetscape, including the intersection of Grand and Douglas, where the University of Miami and Grovites United to Survive (GUTS) have partnered to erect a beautiful outdoor market and incubator space. Furthermore, a collaborative initiative between UM’s School of Architecture funded by The Knight Foundation, has designated Saturdays with MKTplace at Goombay Plaza to host residents and visitors at the corner of Grand and Douglas to enjoy decadent eats by local vendors.

2) Afterschool programs at Tucker Elementary: These programs were put in place to ensure that our youth have safe, engaging community activities (such as dance and martial arts) that are not contingent on the financial means of their parents nor limited by geography. At Tucker Elementary, the Envelopes of Safety program includes martial arts, ballet and an orchestra.  Proof of the project’s success can be found in students’ increased attendance and improved grades;

3) Christ Episcopal/Urban League project: Grove Housing Solution – There is work being done with Christ Episcopal to explore the next steps in developing a mixed rental housing project on their land for 30-40 families;

4) St. Paul Episcopal property: A new pastor has been instituted, and he is looking at options to develop housing on this property. Using the model that has been successful in Overtown, both county and city offices are engaging the churches and Community-Based Organizations in building up their properties to provide homes to members of their congregation and other neighbors;

In total, these projects will add 400 residential units to the neighborhood and continue to bolster the attraction of the Grove.

Grand Avenue will come up bigger and better than ever!