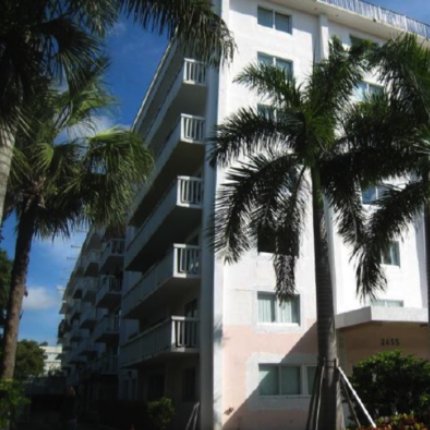 After securing a refinanced loan for the building, Terra is moving forward with plans to renovate and rent out an aging apartment complex called the Summerhill Apartments.

Located at 2678 Tigertail Avenue, the slender seven-story apartment building was first constructed in 1969 across the street from city hall and the Grove Key Marina. It has 97 units with sizes between one and two bedrooms, or roughly 700 square feet to 1,200 square feet.

Martin told The Real Deal that his firm will now begin renovations for the building, including new floors, ceilings, lighting, bathrooms and kitchen finishes — though he’s not ready to talk about specifics just yet.

Renovations are slated to finish by August or September.

He hopes to attract young professionals and bachelor-types in the Grove, like doctors and lawyers. The renovations will cause rents to be “slightly adjusted,” Martin said, but they’ll be determined by the market.

“At the end of the day, the for sale product is great, but a lot of the millennials want mobility,” he said. “We want to create products that can meet that demand.”

Terra bought the apartment building in 2014 and is now looking to expand its rental holdings in the neighborhood, Martin said, citing low vacancies as a sign of untapped demand.

His firm is currently developing Grove at Grand Bay, a pair of twisting condo towers with 98 units that are sold out. Down the street, Terra and the Related Group are also building Park Grove, another luxury condo project with three towers and a total of 284 units.