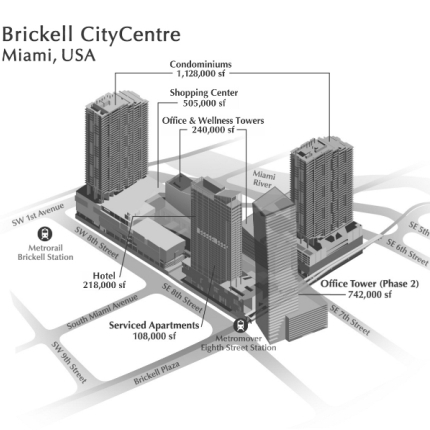 Swire Properties’ planned One Brickell CityCentre tower would be the 40th highrise with condos proposed for Miami’s Brickell neighborhood since 2007, according to a report.

Condo Vultures is reporting that the 1.6-acre site currently allows for more than 400 condos.

“Back in October 2008 as the U.S. financial system was on the brink of collapse, Swire Properties paid $41.2 million – or $169 per square foot – for 5.6 acres of undeveloped that would ultimately become the heart of the proposed Brickell CityCentre project on South Miami Avenue between Seventh and Eighth streets,” according to Condo Vultures.

With Swire Properties’ newest tower, more than 12,000 units have been proposed in downtown Miami as of September 29, according to Condo Vultures.