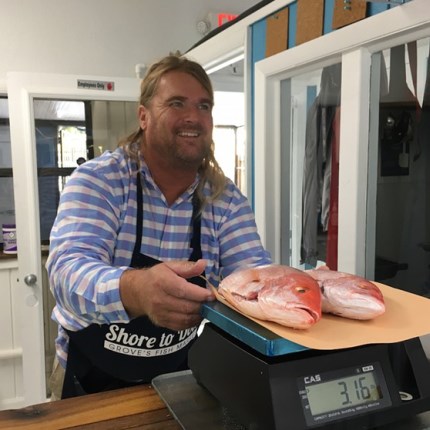 Charter boat!” Sig Ozols barks when he answers his cell phone. For years, the burly 50-year-old with the long blond hair of a Viking (even though he’s Latvian) has run a 48-foot sport fishing boat out of Coconut Grove’s Dinner Key Marina. He began fishing nearly three decades ago after his dad, fresh from a divorce, asked him to drive his car and some clothes to Florida from Indianapolis. He was hooked immediately, like so many from the frozen North lured by the swaying palm trees and balmy breezes. “He just asked me to check it out, and I never went back,” Ozols says.

He’d done some freshwater fishing as a kid in Indiana, and when he got to Miami, he was drawn back to it. A few stints on a drift boat led to three decades as a commercial fisherman hand- and line-finishing throughout Florida and the Caribbean. During many of those years, particularly in Florida, Ozols and other charter boat captains were able to sell their day’s catch right off their boats. That came to an end several years ago, but the move ended up seeding what would become Ozols’ lifelong dream: owning a fish market.

Late last October, Ozols and longtime Scotty’s Landing bartender Indira Funes opened Shore to Door (3380 SW 37th Ave., Miami; 305-529-3471) in a narrow sky-blue space on Douglas Road in Coconut Grove. The bustle of the West Grove — one of Miami’s most vibrant, underserved, and historic black communities — floods the space through the place’s screen door. Off to one side, find a gleaming cooler packed with crushed ice and the day’s offerings: cobia, Malbec-hued hunks of yellowfin tuna, and yellow-eyed snapper from the Bahamas. Funes stands in the far corner of the room, ready to answer any questions or scoop out of a container of snappy dressed conch speckled with crisp red and green peppers.

As a fisherman, Ozols is beyond picky about his fish, even bordering on obsessive. “I’m not trying to outsource to anywhere,” he says. “If the yellowtail aren’t running, so be it; we’ll find hog snapper.”

Along with snagging those yellow-eyes, Ozols also procured silky snapper from fisherman friends in the Bahamas, but the rest of the goods, he says, come from up and down Florida’s coast. It’s hard to predict when he’ll have what. The fisheries regulators, such as the Florida Fish and Wildlife Conservation Commission and the National Oceanic and Atmospheric Administration, along with the ocean, are the ones determining what you’ll eat. But expect the haul to rotate among the many varieties of snapper, grouper (mostly red, occasionally black), wahoo, king mackerel, and mahi-mahi. One of the shellfish Ozols says he’s looking to carry are West Florida white shrimp and sweet little bay shrimp (best when caught at night) whenever they’re available.

What’s more, the shop will deliver fish to your doorstep, free of charge, within a certain radius, Funes says. At the moment, delivery, usually done by Funes herself, is available in Coconut Grove, Coral Gables, and as far north as the Rickenbacker Causeway.

“Just give me a few hours to make sure I have the fish on hand,” Ozols says. “And tips are always appreciated.”