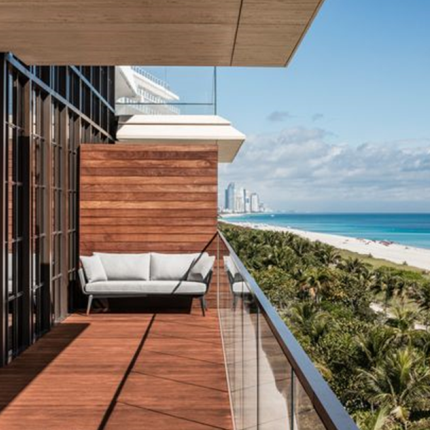 Alex Sapir, CEO of Sapir Corp., used to be a snowbird, spending winter vacations in sunny Florida to escape frosty New York City. Two years ago, he switched the pattern and moved with his family to Miami.

“We decided we wanted a better lifestyle for our kids, one where they didn’t need every minute programed in order to go outside,” said Mr. Sapir, co-developer of Arte by Antonio Citterio, a 16-unit oceanfront condo in Miami Beach.

Florida’s snowbirds traditionally head to the Sunshine State for Thanksgiving and stay or visit repeatedly until early April to escape icy weather in the North and Midwest. In recent years, the trend shifted, with “reverse snowbirds” spending nine or 10 months in Florida and migrating north to escape the humid southern summer. Like many trends, this one was accelerated by the coronavirus pandemic, with some snowbirds heading south in March and April to escape areas hit by the virus and others deciding not to return north at all.

Between September and November 2020, Florida home listings received 32% of all views among buyers looking to move out-of-state on realtor.com, compared to 11% during that same period in 2019. Nearly 22,000 more Redfin.com users looked to move into Florida during the third quarter of 2020, which is about twice as many searchers as there were in the third quarter of 2019, according to Redfin real estate brokerage.

In other words, Florida is hot.

Lifestyle is Paramount for New Floridians

Most Florida purchasers live there nine months of the year, keep a pied-à-terre in New York and have a summer home in the Hamptons, the Hudson Valley, Nantucket or Maine, said Louise Sunshine, a strategic adviser to Fort Partners, developers of the Four Seasons Surfside Residences in Miami and Four Seasons Residences in Fort Lauderdale, a new beachfront condo. Ms. Sunshine calls them “summer birds” because they fly north for the summer.

“This year, the number of people making a permanent home at the Four Seasons doubled or tripled,” Ms. Sunshine said. “As people started spending more time at home due to Covid and realized they could work anywhere, it made more sense to be here where they can go on their boats when they’re taking a break.”

Many of the buyers at the Four Seasons have high school students in private school, college-age students or are empty nesters, she said.

“The pandemic threw people into a tailspin and made them rethink their priorities,” said Simon Isaacs, broker and owner of Simon Isaacs Real Estate in Palm Beach, Florida. “It also accelerated people’s plans. If they had been thinking of someday moving to Florida, they decided not to wait any longer.”

Florida wasn’t immune from the Covid-19 pandemic, with a wave of cases hitting the state not long after the peak in New York in the spring. More than one million people have been infected with Covid-19 in the state so far and more than 19,000 have died in Florida through Dec. 9 according to the Florida state government. However, the warmer weather means that outdoor recreational activities and outdoor dining continue year-round.

Meanwhile, the ability to work remotely provided new opportunities for people to consider where they want to live, said Marisela Cotilla, executive director of sales for the ALINA Residences, a nine-story luxury condo in Boca Raton, Florida.

“People could choose their lifestyle rather than their workplace as their priority,” Ms. Cotilla said. “A lot of buyers this year said they were looking out their windows and decided that they didn’t want to wait five years to do what they want. These couples decided they would rather stay in Florida year-round instead of flying back and forth.”

Before the pandemic, many of this year’s buyers came to Florida for vacations, but didn’t view it as a place to live “real life,” said Giovanni Fasciano, president of Fasciano Investments and co-developer of Arte.

“Once they stay longer working and going to school remotely, they’re recognizing the beauty of the lifestyle,” Mr. Fasciano said.

While Florida has a reputation as a haven for retirees escaping the cold, the state appeals to families and working empty nesters, too, said Shahab Karmely, principal of KAR properties, developer of 2000 Ocean, a 38-story beachfront condo in Hallandale Beach, Florida.

“This year, with kids going to school remotely and people working remotely, we’ve seen more families rent for nine months or a year to try out the fantasy of living in Florida,” said Mr. Karmely. “Now a lot of them have bought homes or are looking to buy and get their kids into school here.”

But he added, “there’s not just one reason for the appeal of Florida, it’s the lifestyle, the climate, low taxes and the feeling of safety and security compared to living in a city right now. The pandemic was the tipping point on all of those things because people got tired of being stuck at home and missing everything that makes New York great, like theater and museums and restaurants.”

Miami and Palm Beach have grown increasingly cosmopolitan, which attracts a younger demographic drawn to the restaurants and nightlife, Mr. Isaacs said.

“There’s a lot of diversity in South Florida too that reminds people of New York, with Europeans and South Americans and Californians and Midwesterners coming here in bigger numbers,” Mr. Sapir said.

The Palm Beach area has become more of a metropolis, with more cultural attractions like the expanded Norton Museum of Art, as well as farmer’s markets, shops and restaurants, said Kerry Warwick, a broker with The Corcoran Group in Delray Beach who represents 3550 S. Ocean, a boutique condo development in Palm Beach.

“Over the past few years, we’ve seen more people coming for the school year because we’ve got better public schools than in the past, magnet schools and a choice of great small private schools, too,” Ms. Warwick said.

Lower taxes are also a driving factor bringing people to Florida, especially from New York and California, Ms. Warwick said. At the same time, even those buyers who choose Florida as their primary residence typically opt to keep their home in New York, Chicago, Boston or Washington, D.C., so they have a place to stay when they visit their families, Ms. Cotilla said.

“Typically, our buyers include their tax advisers and financial advisers in the conversation about buying property in Florida to help them make the decision,” Ms. Cotilla said.

Space, including a private gym, a home office, a media room, a bedroom with a sitting area and plenty of closet space are important to buyers today, said Ms. Sunshine, because they’re using their homes more.

“People want a real cooking kitchen where everyone can congregate, not a strip in the living room, even in a condo,” Ms. Sunshine said.

When it comes to condo living, lower-density buildings with larger units, private outdoor space and plenty of amenities and services appeal to high-end buyers in Florida, Mr. Fasciano said.

The recent boom in demand has overwhelmingly favored the single-family home market. In October, million-dollar-plus house sales in Miami-Dade and Palm Beach counties more than doubled year-over-year, according to statistics from the Miami Association of Realtors. That surge in demand is driving up luxury house prices, Mr. Isaacs said.