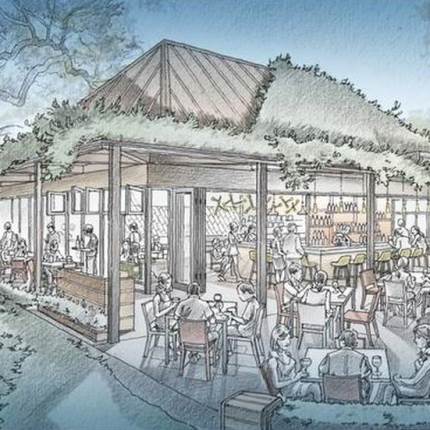 A group of businessmen with ties to a substantial deal to build shops, a marina and upscale restaurants on the Coconut Grove waterfront is poised to score a second contract with the city of Miami for an eatery down the street in a bayfront park.

Glasshouse Coconut Grove LLC is in line for a 25-year lease that would give the company’s partners control of the shuttered Glass House in Peacock Park through 2030. Led by the chef of Eating House in Coral Gables and by Grove Bay Hospitality Group, the restaurant operator of the recently approved $18 million redevelopment project next to Miami City Hall, the company plans to convert the old 2820 MacFarlane Rd. office space into a contemporary American eatery.

If the City Commission approves a deal during its Nov. 20 meeting, the restaurateurs and their financiers would increase their already-significant role in the young effort to rethink, rebuild and revitalize some of the most prized properties in all of Miami.

“I think that Grove Bay Hospitality Group is in a position to help create something very unique and reinvigorate the Grove and the Grove waterfront,” said Glass House principal Francesco Balli, who is also a representative for Grove Bay Investment Group, the team behind The Harbour project next to City Hall.

Balli’s latest venture would be housed out of the eastern half of the fenced-off glass-and-coral rock facility that once housed the Grove chamber of commerce atop a tree-lined ridge overlooking the park. In a partnership with chef Giorgio Rapicavoli, the group is planning an “upscale casual” 179-seat garden-style restaurant with a full-service bar and a walkup counter for park visitors.

The team says it will invest nearly $1million into renovations designed by Celano Design Studios and expects to pay out nearly $250,000 to the city next year, assuming projections of $3million annual revenues are accurate. The team also expects a roughly 30 percent return on their investment each year.

The city is already partnering with some of the same businessmen to build a parking garage nearby and redevelop the Charthouse and Scotty’s Landing restaurants next to City Hall. The project — stalled by a lawsuit that now is before the Third District Court of Appeal — is part of a sweeping plan to reshape Coconut Grove’s waterfront, including Peacock Park and the Glasshouse.

“It’s becoming a beautiful facility,” said City Commissioner Marc Sarnoff, who represents the area. “If you look at the way they’re doing it, the whole thing is open to the park so you have the seating outside. I think it’s a beautiful concept that will complement the park.”

Grove Bay Hospitality Group, Rapicavoli and their investors beat out submissions for the Glass House by two other teams. The project is being financed by the Joanli Family Limited Partnership, which currently has $10million in restaurant and property investments. Jose Garcia, a business partner of one of the principals of The Harbour, Eduardo Garcia, is listed as a Joanli director.

Balli said Eduardo Garcia was not a part of the bidding group for the Glasshouse but has not ruled out investing in the project.

Balli said he didn’t know the Glasshouse project would open up but jumped at the chance when the city put out a request for proposal. He stressed that he’s not taking for granted that the commission will approve the lease but believes the project will be a success.

“People are going to feel comfortable having lunch, brunch or dinner overseeing a park that has been under-utilized for a number of years,” he said. “It should be a very cool, very relaxing environment where you can hang out and maybe even watch your kids play soccer while enjoying a glass of wine.”