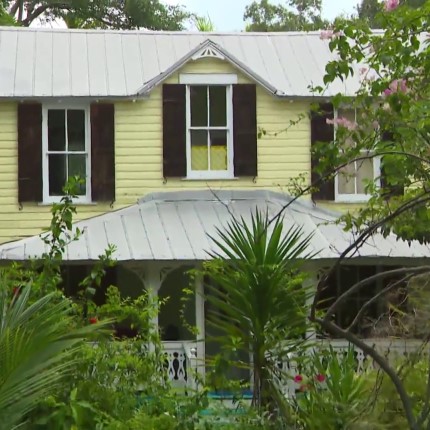 In a Miami neighborhood steeped in history, one home stands out. 2538 Lincoln Avenue is a cheery-yellow, two-story Dade County Pine home adorned with unique architectural features that according to Maria Freed, Vice President of the Coconut Grove Park Homeowners Association says helps tell the story of Coconut Grove’s past.

Built by a shipmaker in the early 1900s, Freed said it is nicknamed “Seaside” because of its nautical history. She says it is one of the oldest homes left standing in Coconut Grove.

It has been featured in the television series “Miami Vice” and the movie “Miami Rhapsody,” starring Sarah Jessica Parker. Local artist Eileen Seitz has painted it, a piece aptly titled ‘A Century in the Grove.”

“This house has been kept in great condition for over a 112 years,” Freed said.

Now it’s the home’s future that concerns her.

“No one knew that the home had the potential of being demolished. It really was a surprise to everyone.”

The home’s new owner is seeking permission from the City of Miami to demolish it. That’s according to a Waiver Notification that some who live nearby, like Mary Brunk two doors down, said she never received.

Reporter Christina Vazquez requested from the City of Miami a copy of all parties who received the Waiver Notification, Brunk’s name and address were not on the documents provided.

“We should have had notice,” Brunk told Local 10 News’ Christina Vazquez, “Who else would be more impacted than the immediate people who live on the street and will effect you on a day-to-day basis?”

A growing coalition of neighbors, community members, and preservationists are now working together to “Save Seaside.” This includes Dade Heritage Trust, Miami-Dade County’s largest preservation organization. Executive Director Christine Rupp tells Local 10 News that “we are super interested in this house in Coconut Grove and we already have a coalition built with the Coconut Grove Village Council and the homeowners association there.”

She says they are partnering to “advocate together to make sure we preserve the property.”

Rupp says the waiver application from the new owner who is applying to demolish the house kicks off a review in the City of Miami to see if the building should be demolished.

Since the home is more than 50 years old, Rupp says the city’s planning and zoning Historic Preservation Division will review the owner’s application. She also says Chapter 23 of in the Miami Code of Ordinances allows the City to designate the home historical without a property owner’s consent.

“You have someone who is trying to build a new home for their family and you have a neighborhood that wants to save the structure that is there,” said Miami Commissioner Ken Russell, “especially in a city as young as Miami we need to keep what we have but we also want to honor people’s property rights.”

Russell tells Local 10 News the previous owner did not designate the home as historical. As for the City of Miami’s Historic Preservation Ordinance, which grants the city the authority to designate the home historical, Russell said, “that is the most controversial way to do it. When you designate a property against the wishes of the owner, that’s when it becomes a battle and that’s when the bar should be at its highest. Is this property so important to the city that we should do so against the wishes of the property owner and we should designate it and preserve it?”

Russell said on Wednesday that he spoke to the new owner of the legendary Coconut Grove home to find common ground. He said at the very least the owner was looking to utilize existing materials into a new structure such as the home’s Dade County Pine.

“They are also open to donating the house to a not-for-profit or the city if they want to relocate it at the city’s cost,” Russell said.

For Freed, the idea of relocating the home somewhere else in Coconut Grove as an alternative to demolition would be a “win-win” scenario. That’s if they can find someone willing to pay for relocation, a location for the home, and identify a sustainable budget for future home maintenance. The “Save Seaside” coalition will be meeting Thursday with an attorney to strategize options.

Many neighbors say they never saw a for sale yard sign outside the house and were stunned to learn from county property records that the home sold last June for more than $136,000 under market value at $382,000.

Many neighbors of the property told Local 10 News they only learned the property had a new owner and of that owner’s waiver notification asking permission to demolish the home through Freed’s Facebook page “Old Coconut Grove Houses” which she says she created after “walking around and watching house by house leave us and it has happened quickly.”

Her May 13 post “Can we save Seaside?” struck a cord with several residents who believe the City of Miami has approved the demolition of too many of the area’s historical homes, she said.

Rupp says “when you look at this lovely, little wood-framed cottage in Coconut Grove that is a symbol of Miami history,” said Rupp, “and since Miami is a place where people are from other places, what these architectural symbols of our history do is they create a shared history. They help tell the story of our community.”

“If we take it all away,” Freed stated, “what do we pass on to future generations?”