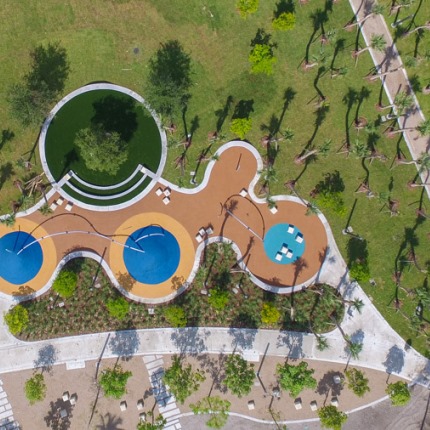 The seven-acre park, which formally opened on Saturday, spreads a tree-ringed carpet of grass, walkways and gardens over the site of the old Coconut Grove Exhibition Center, a deteriorated, bay-blocking eyesore next to Miami City Hall that was demolished last year. The park is the first finished project under a 2008 master plan designed to remake and open up public access to the Grove’s cluttered but historic and picturesque waterfront.

“It took time, but we got really good results,” said Diana Herrera, the new park’s manager, as she pointed out the butterfly-attracting gardens, a children’s playground with a decidedly cutting-edge design, and a shady area with concrete picnic tables in a smoothly contemporary style. “It’s a very nice park in the middle of Coconut Grove.”

Its centerpiece: a broad oval lawn and an adjacent tree-shaded grove that will serve as staging areas for the sailboat regattas — hence the park’s name — that the Grove waterfront famously hosts in wintertime. The first event will be a U.S. Sailing Olympic qualifier in January.

Miami City Commissioner Marc Sarnoff, who represents the Grove and championed creation of the park, said he pushed city officials to get it finished before he leaves office in November because of term limits. His wife, Teresa Sarnoff, is running for his seat and stood by him, though she did not speak, during the park’s ribbon-cutting on Saturday. But he said his push was motivated by a desire to ensure it was done, and done properly, and not by the notion that its completion might help her campaign.

“This is a pretty big legacy. I wanted to get the Sasaki plan done,” Sarnoff said, using the name of the firm that developed it to refer to the Grove waterfront master plan. “This city is famous for hiring famous designers for a lot of money and then never implementing the plans.”

Sarnoff noted that he was closely engaged in the park’s development, soliciting ideas from Grove-based architectural giant Arquitectonica and renown landscape architect Raymond Jungles before the city hired the national firm Kimley-Horn, responsible for the final design.

Park construction cost $6 million from a variety of sources, including development impact fees and rent proceeds from the hit cable TV show Burn Notice, which used the exhibition center as production headquarters. Numerous trees at the site were saved for the park and supplemented with a broad variety of tree, palm and plant species.

Voters approved the so-called Grove Bay plan, which will refurbish the marina and replace Scotty’s and the adjacent Chart House restaurant with three eateries housed in sleek glass-and-steel structures.

The newly occupied dockmaster building, which sits on stilts because of federal flood rules, will also allow demolition of the old marina building, which sits at ground level. That opens up views of the docks and Biscayne Bay from the park and room for a broader bayside promenade and a small garden, she said.

Further improvements are still to come. Work has already begun on resurfacing and beautifying the city hall parking lots with more trees and ground plantings to tie into the adjacent new park. A park promenade will eventually connect across Pan American Drive to the Grove Bay project. And the city will build a launch ramp for sailboats using Regatta Park, Herrera said.

In the meantime, she said, Grove residents have begun finding their way to Regatta Park, especially after temperatures cool off in the early evening.

“People are coming with blankets and they lie down and read a book,” Herrera said.