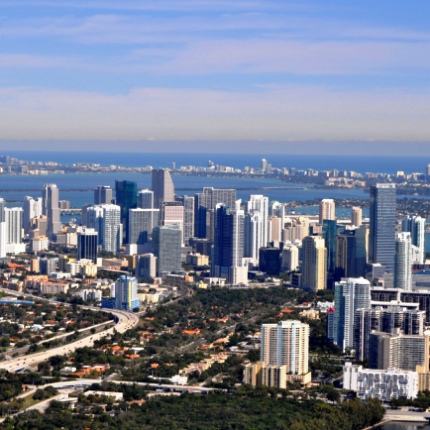 The Miami real estate market boomed in December as sales of single family homes and condominiums experienced significant growth, according to the latest data from the Miami Association of Realtors.

Listings of single family homes grew 24.4% and condo listings were up 11.9% compared with December 2012.
‘The strength and vitality of the Miami real estate market is certainly encouraging and exciting,’ said Liza Mendez, chairman of the board of the Miami Association of Realtors.

‘Both international and domestic buyers want to be in Miami because of our great weather, multicultural environment, global business opportunities, and enviable lifestyle. Miami continues to mature as a world class, global metropolis, attracting worldwide attention that is boosting the local market and economy,’ she added.

It is demand that if fuelling the price growth, according to Franciso Angulo, residential president of the Miami Association of Realtors. ‘Yet, while median prices have experienced growth, they remain affordable, an indication that the Miami real estate market favors both buyers and sellers,’ he added.

Further, REO and short sales were 21% and 17%, respectively. In contrast, in December 2012, traditional single family home sales accounted for 56% of all sales and REO and short sales were 20% and 24%, respectively.
The data also reveals a fall in cash buyers. In Miami-Dade County, some 57% of total closed sales in December were all cash sales compared to 64% in December 2012, but this was still significantly higher than the national average of 32%.