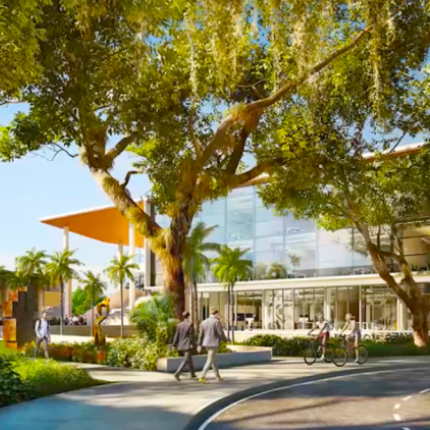 Rendering of the STEM center at Ransom Everglades

The prominent, private middle and high school is under contract to purchase a home at 1921 South Bayshore Drive for about $3.7 million, according to Engel & Völkers Miami. The deal, set to close Nov. 15, would add about an acre to the 16.7-acre campus.

The property the school is buying includes a three-bedroom, 4,612-square-foot home. Records show Jeffrey Degen and Gary Majka of Degen Majka Interior Design are selling the Coconut Grove lot. It was listed with Victor Olaniel of The Olaniel and Elliott Team and Angel Nicolas of The Nicolas Group at Engel & Völkers. It was previously owned by Maria, Scott and Howard Srebnick, and Howard’s wife, Stacy Robins of the Robins family.

It’s unclear what the school plans to use the 40,500-square-foot property for. Ransom Everglades declined to comment.

It’s not the first time the school, which has its high school at 3575 Main Highway and its middle school at 2045 South Bayshore Drive, expands its land holdings in the Grove. In 2016, Ransom Evergladers paid nearly $35 million for the adjacent property at 3551 Main Highway. Earlier this year, developer and neighbor Caroline Weiss sued Ransom Everglades over its amended special area plan. In addition to increasing the Upper School’s total lot area to 801,319 square feet, the special area plan increases its maximum enrollment by 67 for a total of 726 students, increases staff from 140 to 160 and increases the surface parking lot by 31 spaces for a total of 241.

The bayfront school is also renovating its campus and building a new Science Technology Engineering and Math center. Earlier this month, it unveiled a portion of the completed renovations to the Cameron Hall, according to a press release.