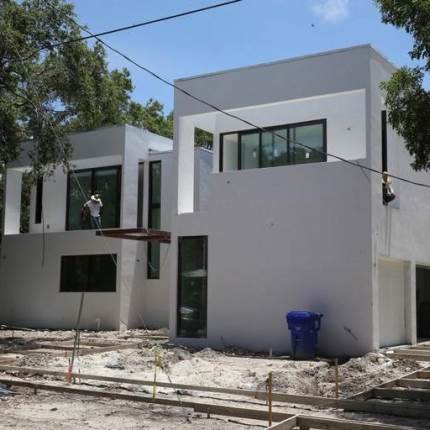 A movement to curtail the infiltration of boxy, zero-lot line modern houses in Coconut Grove could lead to more stringent rules for single-family home development in the neighborhood.

The Miami Planning and Zoning Board voted 8-1 last week to recommend approval of a rewrite of zoning overlays that govern what can be built in Coconut Grove. The proposed regulations will go before the Miami City Commission for final adoption.

The most significant change would limit the size of a single-family home to 50 percent of the total lot’s size. So if a lot is 11,000 square feet, a developer or property owner would only be allowed to construct a 5,500-square-foot building or smaller. The principal front setback would be a minimum of 30 feet and the side setbacks would be a minimum of 10 feet on the right side and feet on the left.

In addition to reducing the size of houses, the rules require buffer trees for every 15 feet of frontage. The trees must be a minimum of 20 feet tall and have 8-inch thick trunks. The new guidelines are also aimed at protecting the Caribbean and Bahamian architectural style of the West Grove neighborhood.

Jeremy Calleros Gauger, Miami’s deputy planning director, said city staff held numerous meetings with Grove residents and stakeholders over the past year to come up with the new rules.

“The main thing we looked at is floor lot ratio,” Gauger said. “A significant majority [of Grove residents] are for decreasing it in general, while a minority wanted to retain the existing capacity.”

Under the current regulations, single-family developers have been able to tear down old properties and build sleek, luxurious homes that take up 50 percent or more of a developable lot. In some cases homes have been built up to the property line, while lush vegetation has been replaced by pavers, concrete paths and driveways. Longtime residents fear the new homes threaten the Grove’s character of having an extensive tree canopy and a lot of vegetation on single home properties, according to a Miami Herald report last year.

Gauger said about 70 percent of Coconut Grove residents favored new rules that limit the size of new single-family homes, while only 30 percent opposed the changes. Nathan Kurland, a Realtor who lives in Coconut Grove, said the current regulations for the Grove’s neighborhood conservation district have allowed runaway development.

“You don’t need to be a psychic to know that the current code is too vague and contains loopholes that allows a few developers to game the system to build maxed out structures that require removal of specimen trees,” he said. “Over 7 charrettes and a countless number of meetings has produced a neighborhood conservation district code that while not perfect, it is certainly an improvement.”

However, Coconut Grove-based architect and developer Charles Treister said limiting the size of single-family homes to 50 percent of a lot’s total coverage would create a negative impact on real estate business in the Grove submarket.

“I think it is a mistake for our community and for the city,” Treister said. “We live in a society where property rights and freedoms are important.”

He said any changes that require less than 60 percent lot coverage would discourage new development. For example, Treister noted, if someone owns a 5,000-square-foot lot, the property owner would only be allowed to build a 2,200-square-foot building if it incorporates a car garage or covered patio.

“That does not work in today’s market,” he said. “It will lead to lower property values and people will stop moving into the Grove.”