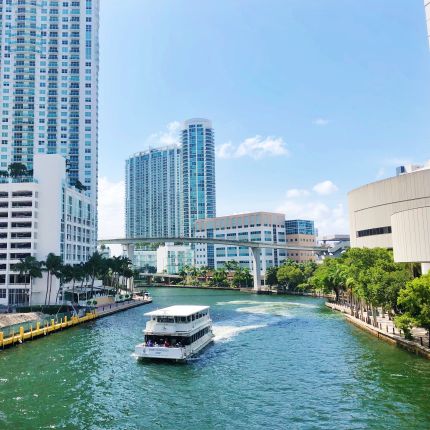 As passenger counts on Poseidon Ferry’s Miami-Miami Beach route, now at about 120-150 riders a day, continue to rise, CEO Johnathan Silvia is looking ahead to adding service to Coconut Grove in January.

With the help of Irene Hegedus, the county’s chief of transportation enhancement, the company is working on a docking agreement at Dinner Key Marina, just behind City Hall.

“There’s immediate access to the trolley system,” Mr. Silvia said, “and we have good partners in Freebees, so there are plenty of ways to get to wherever you want to go. The ferry service is coordinating well with land transport options; for example, the Miami Beach trolley service picks up passengers a block down Alton Road from Poseidon’s docking site on West Avenue. A deal to purchase a second ferry fell through when a survey revealed it was in considerably worse shape than advertise so we are still actively looking. But it looks like we can start service by the end of January. The Coconut Grove trip would probably run three times a day until it catches on.”

“Ridership is now about equally split between commuters and tourists,” Mr. Silvia said. “In deference to vacationers, weekend service starts later and continues further into the night.”

Pleasure cruises are back on the calendar. At 1 p.m. Dec. 19, the popular Sailing with Santa cruise will once again embark on a two-hour cruise around Biscayne Bay with Santa and his elves. The $20 fare (infants under 2 sail free) includes a photo with Santa, a snack of milk and cookies, and an early present from the North Pole.

Coming up in January is a New Year’s Eve event and, later in the month (date to be announced), Doggy Day on the Bay, for canine sailors and their human friends.