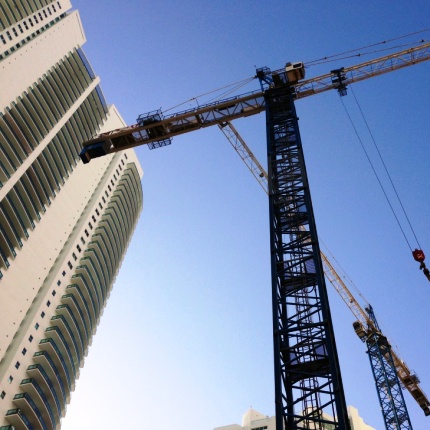 Cranes are again rising over this city, as the poster child for the real-estate collapse enjoys a new condominium boom fueled by foreign investors looking to park their money in U.S. real estate.

For several years after the housing bubble burst, a glut of towering condo buildings sat largely empty. Condo values plunged nearly 60% from peak to trough, according to the Miami Association of Realtors. Financing for buyers and developers dried up. Now nearly all the once-vacant units are filled up, and demand is outstripping supply. There are 118 condo towers proposed in the Miami area, including 35 under construction, according to Condo Vultures LLC, a real-estate consultancy.

The 41 towers proposed for downtown will add 12,100 new units—well shy of the 22,200 units that were built during the 2003 to 2008 boom, but still a remarkable turnabout given that downtown construction was essentially dormant until 2011.  “This boom is very reminiscent of where we were a decade ago,” said Peter Zalewski, principal at Condo Vultures.

While the growth feels similar to the bubble-fueled oversupply that remains a painful memory in Miami, developers note that robust international demand has created a new cash-financing model they believe is safer than the easy bank loans that fueled the last boom. They typically require buyers to put down at least 50% before closing, which means the owners would lose their money if they walked away.

Under the new payment arrangement, developers are relying more on buyers’ deposits, and less on debt, to fund construction, which they say puts projects on more solid footing. And because banks have become stricter about what projects they finance, less-experienced developers are weeded out, they say.

Developer Carlos Melo relied on that financing model to build 23 Biscayne Bay, a 17-story project that last year became the first completed tower of the new cycle. He said the building is fully sold, and roughly 90% of the owners bought their units as investments and are renting them out. “They are looking to sit their money in a safe place,” Mr. Melo said.

Miami is just a bigger example of a recent national tilt toward multifamily buildings—both apartments and condominiums—instead of the single-family homes that dominated during the bubble years leading up to the recession. While the majority of national construction is still of single-family homes, the recent rebound in construction activity—whether measured by new starts or permits—has been centered in multifamily buildings. 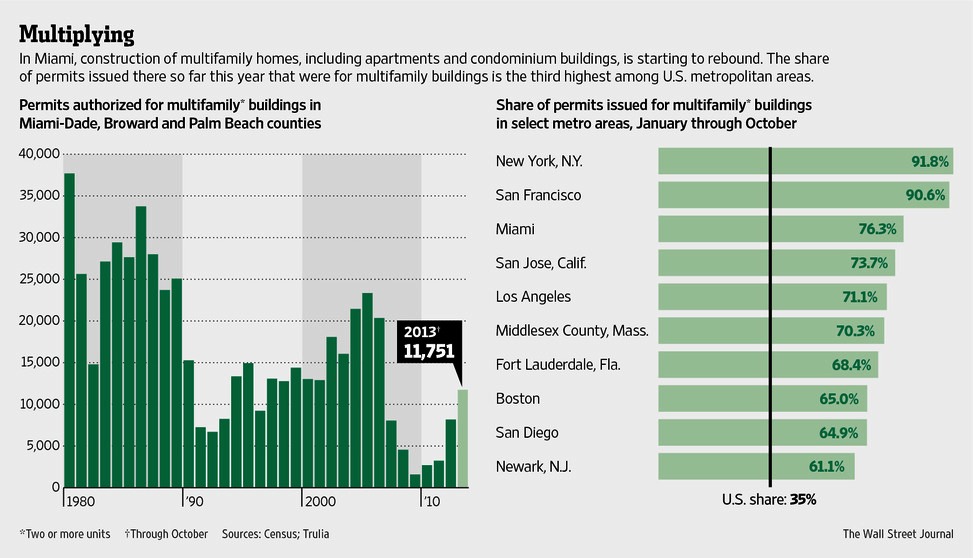 Commerce Department data released last week showed nationwide residential building permits rose to their strongest pace since June 2008, a rise that was driven by a 15% surge in multifamily permits. About one in three building permits issued this year has been for the largest multifamily category—buildings that have five or more units—according to Jed Kolko, chief economist for real-estate website Trulia. From the 1990s until the housing bubble ramped up in 2004, the share hovered around one in five.

Nationally, builders are responding to rental demand that remained strong through the recession and today’s still-tepid recovery. They are also correcting the source of overbuilding during the bubble years. “Multifamily has been a critical part of the construction recovery. During the bubble a lot of the overbuilding was in single-family homes, and as the construction market rebounds and as more people are looking for rentals, builders have responded with more multifamily construction,” Mr. Kolko said.

The numbers are even more dramatic in and around Miami. In the South Florida region composed of Miami-Dade, Broward and Palm Beach counties, roughly 70% of residential construction permits issued through October have been for multifamily units. About 7,000 rental apartment units have been proposed for Miami’s greater downtown area, Condo Vultures’ Mr. Zalewski said. Among the factors driving growth are high rental rates and financing that is more readily available because banks consider the rental market strong. While the median rental rate in 2009 was $1.48 a square foot, it is now $2.23 a square foot, Mr. Zalewski said.

The city’s condo boom has been even stronger, fueled by foreign investors who typically pay cash and are looking to hold rentals, instead of flipping for profit as investors did in the last cycle. About 85% to 90% of new-construction buyers are foreign, mostly Latin American, estimates Alicia Cervera Lamadrid, managing partner at Cervera Real Estate, which is handling sales for 16 condo projects. “The payment structure really separated the speculators from the well-funded,” Ms. Cervera Lamadrid said.

Buyers say they are drawn to Miami’s increasingly cosmopolitan vibe and cultural offerings such as the Pérez Art Museum Miami, which is set to open Dec. 4. They also consider such investments more secure than leaving their money in more economically volatile places like Argentina and Venezuela. Miami’s high-end condo market has proved especially vibrant, and has gone hand in hand with new luxury shopping destinations rising up in the Brickell financial district downtown and the Design District to the north. Some of the most lavish projects have drawn star architects like Zaha Hadid and Bjarke Ingels.

In August, Umberto Mascagni, a 24-year-old Italian who moved to Miami three years ago to study international business, put down a deposit on a $700,000 two-bedroom condo in a proposed tower overlooking Biscayne Bay that has yet to break ground. He and his father began investing in Miami real estate in 2008 and now have six additional condos they rent out. “In the past two years, the market has been crazy,” Mr. Mascagni said. He is prowling for other investment opportunities, he said, but “always with open eyes, always careful.”

Still, some are sounding cautionary notes. Developers are sometimes starting construction with just buyers’ deposits, without lining up financing to ensure they can finish it off, said John Sumberg, managing partner of the law firm Bilzin Sumberg, who advises developers. “They figure, ‘I’ll get it when I need it,’ ” he said. But “at some point in the cycle, the lenders may say there’s too much product and this isn’t a good bet.” In addition, some developers are backing away from buying land because prices have risen so much, Mr. Sumberg said. That could “curb the dramatic velocity we’ve seen” in new construction, he said.

Carlos Rosso, who heads the condo division for the Related Group, a developer burned badly in the last cycle, said a similar bust is unlikely this time around. “As long as there’s cash from buyers and banks are disciplined enough not to overextend themselves, I think this is a long market because there’s so little supply,” he said. His company now has 10 condo projects under way, compared with more than 30 it built in the last upcycle. Also, the sales pace isn’t as frenzied as in the last decade. “Back then, I saw lines at sales offices starting at 12:00 the night before” they opened, said Alan Ojeda, chief executive of the Rilea Group, a developer. “I don’t see lines now.”