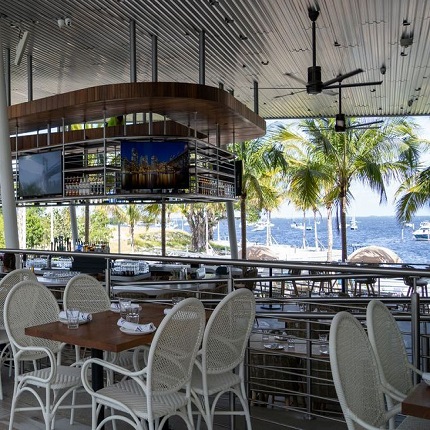 The Bayshore Club is finally open in Coconut Grove.

The long-awaited restaurant and bar at the nine-and-a-half acre Regatta Harbour development occupies the former space of funky old Scotty’s Landing, in the shadow of the first Pan American seaplane terminal.

The retro-chic restaurant from Grove Bay Hospitality Group takes full advantage of its waterfront location, allowing guests to arrive by land or by sea if they are so inclined.

“Miami’s boating culture is a vital part of the Bayshore Club concept,” said Eduardo Garcia of The TREO Group, developers of the Regatta Harbour project. “Bayshore Club “marks a pivotal step in revolutionizing the area’s waterfront with a vibrant culinary experience that aligns with Regatta Harbour’s nautical spirit of old Coconut Grove. With unparalleled bayfront and marina views, patrons will experience a first-hand look at Miami’s boating lifestyle while indulging in a delicious dining experience.” 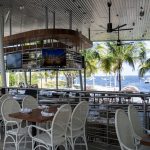 But you don’t need a boat to sample the menu while sipping a signature cocktail such as the Marina Mule, the Pan American and the Summer of 1930. Grove Bay partner and Chef Jeff McInnis (of Stiltsville Fish Bar, Root & Bone Miami and Mi’talia Kitchen & Bar fame) is in charge of the menu, which will offer classic fare with tropical influences. Think fish tacos, blackened mahi sandwiches, whole fried snapper, tuna tartare cones and grilled churrasco. 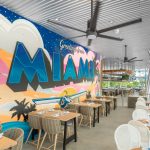 A mural at the new Bayshore Club in Coconut Grove. The decor pays homage to mid-century travel, a tribute to the former Pan American seaplane terminal that once stood in the same space. (PHOTO CREDIT: Miami Herald) 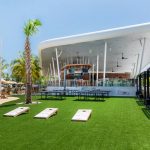 The open-air restaurant, which was designed by Celano Design Studio and pays homage to mid-century travel, seats 300 guests and features a 360-degree bar at its heart. An overhang keeps the sun at bay while allowing bay breezes to waft through. North of the restaurant is a sprawling lawn with such games as corn hole and ping-pong, plus fire pits for the chilly nights (they will return, we hope), lounge seating and private cabanas.