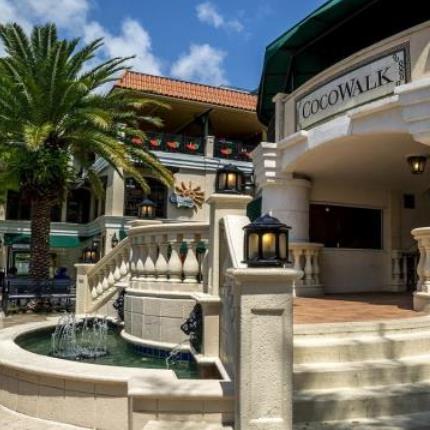 The University of Miami brought together some of the nation’s biggest real estate players to discuss how they’re dealing with rapidly changing trends, and a major revamp for CocoWalk was among the biggest news.

One of the highlights of the meeting was Michael Comras, head of retail brokerage/developer Comras Cos., unveiling the conceptual plans for redeveloping CocoWalk, a retail center in the heart of Coconut Grove. Comras and his partners have been preparing a redevelopment plan for the property since buying it in 2015.

The renderings Comras showed the audience were conceptual and subject to change. The third-floor of retail and the building in the center of the plaza would be demolished. Comras plans to add 60,000 to 70,000 square feet of creative office space. The office space in Coconut Grove is almost completely full and the neighboring Mayfair building has converted from retail to office, so Comras believes there’s plenty of demand.

The conceptual plans for CocoWalk show neighborhood-oriented tenants such as a grocery store, fitness and a farmer’s table.

“There is a reason why the Grove is coming back because people don’t want to commute anymore,” Comras said. “They don’t want to be stuck in their cars. We can’t live with single-purpose destinations like this. They need to be more mixed use.”