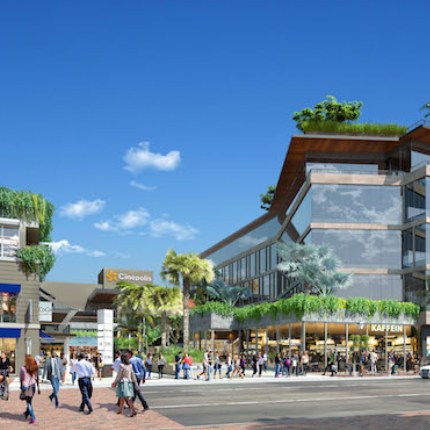 The owners of CocoWalk, one of Miami’s most iconic retail centers, began work in May marking the property’s largest and most transformative wave of demolition.

May’s demolition will usher in redevelopment of the eastern side of the complex, which will soon be home to a new 85,000-square-foot, five-story office building and 20,000 square feet of street-level retail space. The completed project, comprising 250,000 square feet of commercial space, is expected to deliver in late 2019.

The highly anticipated redevelopment of CocoWalk coincides with a surge of new residential and commercial activity in Coconut Grove. Located just south of Miami’s urban core along Biscayne Bay, Coconut Grove is Miami’s oldest neighborhood and is famous for its Village-like charm and bohemian character.

The rise of new luxury residential towers, coupled with the opening of trendy restaurants and boutiques alongside longstanding coffee houses, art galleries and public parks, have cemented Coconut Grove’s appeal as one of Miami’s most beloved lifestyle destinations.

The demolition of CocoWalk’s east building follows the start of a large-scale remodel of the property’s west side, now underway. A new color scheme, modern design and updated storefronts are peeking out from behind construction fencing along Grand Avenue.
CocoWalk will remain open for business during construction, with tenants including Cinepolis movie theater, YouFit Health Club, Chase Bank and The Gap continuing to serve the neighborhood.

The redevelopment is being led by Federal Realty Investment Trust, Grass River Property and the Comras Company, who joined forces to purchase CocoWalk in 2015 with the goal of improving the center’s connectivity with surrounding streets and aligning its uses with the area’s changing demographics.

“The community has been waiting for a new and improved CocoWalk for years and now our completion is within reach. By the end of next year, our center will come back to life with chef-driven restaurants, neighborhood amenities, and unique retail offerings,” said Chris Weilminster, president of the mixed-use division for Federal Realty.

“By adding offices, we will drive more foot traffic to area businesses and meet rising demand amongst companies that want to be located in one of Miami’s most walkable and vibrant neighborhoods.”

The Comras Company is spearheading the center’s retail leasing and Blanca Commercial Real Estate is heading office leasing efforts, with both actively working to secure tenants.

The updated retail mix at CocoWalk will feature well-known brands and local operators providing lifestyle, wellness, beauty and other daily services. Food and beverage options will include fast-casual and sit-down restaurants that appeal to nearby residents and Coconut Grove’s population of businesspeople, tourists and consumers. The centerpiece of the new CocoWalk is an open-air courtyard complete with café seating, water features and native foliage evoking the neighborhood’s lush tree canopy.

“Home to a growing daily population, walkable streets, market-leading demographics, and a number of schools in the immediate area, it’s no wonder why Coconut Grove is appealing to retailers from within the South Florida region and beyond,” said Michael Comras of The Comras Company. “The redeveloped CocoWalk will add a new option for retailers, restaurants and lifestyle-driven services, all set around a central courtyard that will quickly become one of Miami’s great public spaces.”

“One CocoWalk tenants will have access to on-site dining, shopping and entertainment an elevator ride away, high-end residences and hotels within walking distance, and proximity to the city’s top public and private schools,” added Tere Blanca of Blanca Commercial Real Estate.

“The building’s central, easy-to-access location will make it especially appealing to business decision-makers residing in and around Coconut Grove who currently commute outside the area. More than anything, companies at One CocoWalk will be joining a vibrant and growing community that is ideal for attracting and retain talent in a connected urban environment,” she added.

Long considered one of Miami’s most pedestrian-friendly neighborhoods, Coconut Grove has seen the arrival of new transit options that make getting around easier than ever. The City of Miami’s free trolley service, now operating in Coconut Grove, connects passengers to nearby Metrorail stations, and a new app-based service provided by Freebee shuttles people around the neighborhood’s central business district in electric carts free of charge.