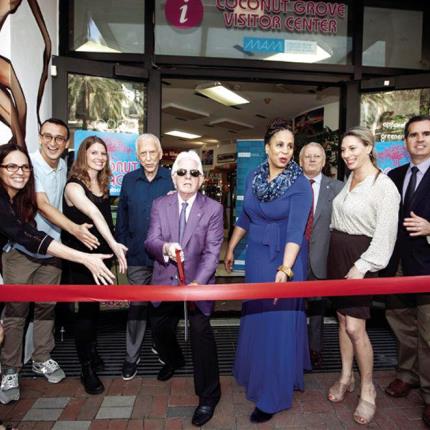 On Thursday, March 5, the new Coconut Grove visitor center was unveiled by William Talbert, president and CEO of the GMCVB at Coconut Village. The expansion is part of a greater effort by the GMCVB and Coconut Grove BID to ensure that visitors and the local community have access to information throughout the city’s multiple and diverse neighborhoods.

In fact, Connie Kinnard, vice president of multicultural tourism and development for the GMCVB indicated that the town was built by Bahamians.

“There’s some heritage here in the shops and really everything else you can do here,” she said. “We have everything here for Black Miami, Black visitors and diverse travelers.”

The new visitor center was established to serve as a resource for visitors and the local community. The center will help attract tourists to its businesses throughout the town’s area by offering information about Coconut Grove.

Kinnard, too, mentioned that opportunities for development still exists in the West Grove area of Coconut Grove, which is a predominant Black region in Miami.

“In particular, we hope development on this part of the Grove will help spur more development in the West Grove because we’re all one area,” she said. “Coconut Grove is Coconut Grove. It doesn’t have to be divided.”

He recalled the area having a hippie vibe, where patrons of his business would often walk in wearing no shoes and playing the guitar.

“We’ve always been a waterfront community. I’ve seen this area develop nicely, but I’ve been really driven to see something happen in the West Grove,” said Trainer. “Because I think that’s the area that should really be developed and should be the gateway of Coconut Grove.”

Talbert shared that he’s been coming to the Grove for 50 years and remembers when Monty’s was just a one-story building. He introduced some of the other businesses of the Coconut Village Center who were present and spoke of their establishment’s lasting legacy.

Stores such as, Maya Hatcha, CatchAWave Surf Shop, Kcullshop and Kreative Gardens are some of the businesses in the Coconut Village Center. The unique mix of merchants effectively represent the communal feel of the town, while the façade is surrounded by vibrant art.