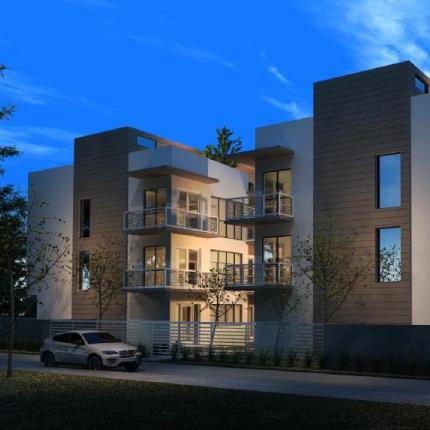 Grove Place, a newly announced townhouse project on the northern edge of Coconut Grove, is gearing up to start selling units next month.

Plans for the project, at 2701 Southwest 28th Avenue, include 21 three-story residences. Eighteen of those units will be split between three buildings for the first phase, and the final three will occupy a separate, fourth building on the property’s northern end in the second phase. Each unit will come with a two-car garage on the buildings’ first floors, and come equipped with smart home technology.

The project is being developed by the Paragon Group of South Florida, whose principals are Luis Gonzalez and Jorge Gonzalez (the two are unrelated).

Luis Gonzalez stated hat his group chose the location because of its proximity to the neighborhood’s Metrorail.

He also said that another developer has owned the land previously and wanted to build a five-story structure, but met resistance from neighbors who felt the project didn’t fit the neighborhood. Paragon paid $1.2 million for the site last year, according to Miami-Dade County property records.

“We opted for the townhomes,” Gonzalez told TRD. “It’s a much lower density than we can build on the property, but we decided it’s the right thing to do for the community.”

The units will be 3,700 square feet, including their rooftop space, with an interior size of 2,350 square feet.

Gonzalez said prices will hover around $250 a square foot, which roughly equates to $580,000 per unit — though those numbers are not final.

Sales will launch in July, starting with a “friends and family” opening. The remaining units will hit the market by the end of that month.

After that, Gonzalez said Paragon will seek building permits, and groundbreaking can begin as early as the end of this year. Construction would wrap up by mid-2017.

Gonzalez said the project brings two unique qualities to the current townhome market in the area: its location, a block away from the Metrorail, and the ability to customize the unit.

Paragon will sell upgrade packages to personalize each unit, whether it’s turning the first floor into a man cave or in-law quarters, or splitting one of the third-floor master bedrooms into two smaller children’s bedrooms, he said.