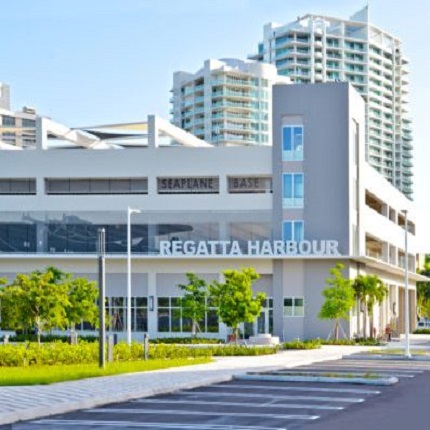 A major tenant, the second commercial venture to open for business in this high-profile venue, has officially begun op­erations at the Regatta Harbour Parking Garage, bringing new life to the Coconut Grove waterfront.

Delivered in multiple phases, this marks a milestone for the mixed-use project that aims to turn the Grove waterfront into an around the clock, “Play by the Bay” destination with a curated tenant mix.

The new municipal garage is next door to historic Miami City Hall and the City of Miami’s Re­gatta Park and Dinner Key Marina. The building is owned and operated by the Miami Parking Authority (MPA), and officially opened in August 2020.

The garage is a key component of the rising mixed-use develop­ment called Regatta Harbour, the combined effort of The TREO Group, the City of Miami, and the parking authority.

The overall project is to remake the waterfront in an area that for years was home to Scotty’s Landing and The Chart House restaurants.

The garage, with its foundation of leasable commercial spaces, is at 3385 Pan American Drive, amidst Regatta Harbour’s 9.5 acres along the Grove’s historic waterfront. The new Wells Fargo location encompasses the western end of the garage.

As residential and economic activity within the sub-market continues to soar, the bank’s new, 2,373-square-foot loca­tion provides Coconut Grove residents and businesses with a heightened level of convenience, including personalized banking, investment, and lending services, according to The TREO Group.

To increase exposure and drive foot traffic, the bank relocated its storefront from 2665 S Bayshore Drive to Regatta Harbour.

“Creating a dynamic mix of tenants is a critical component to ensuring Regatta Harbour transforms the neighborhood’s waterfront into a lively gathering place aimed to benefit the local community and support long-term economic growth,” said Eduardo Garcia, principal of The TREO Group. “As Coconut Grove’s long-awaited resurgence unfolds, we are pleased to announce the project is nearing completion with the opening of another tenant locale.”

This announcement follows the May opening of Anatomy, a fitness program that integrates exercise with sports science, wellness and beauty.

Regatta Harbour is slated for completion in 2022. The Arqui­tectonica-designed development is to have more than 100,000 square feet of entertainment, curated retail and chef-driven restaurants.

The first phase was completed in 2019 with its marina, follow­ing a $5.5 million overhaul of the former Grove Key Marina site.

Founded in 1852 and head­quartered in San Francisco, Wells Fargo provides banking, invest­ment and mortgage products and services, as well as consumer and commercial finance, and has offices in 37 countries and territories.