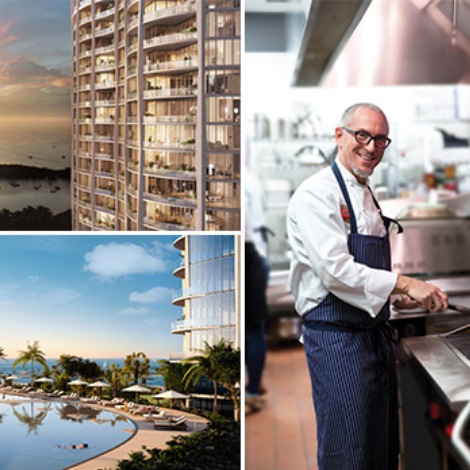 Miami restauranteur and chef Michael Schwartz is adding a second Coconut Grove eatery to his portfolio of restaurants in South Florida, developers of Park Grove announced on Tuesday.

Schwartz will open a 3,500-square-foot restaurant at Park Grove, three-tower residential development with a two-acre sculpture park designed by Enea Landscape Architecture. The development, which will include two 20-story towers with 72 units each and a third 20-story tower with 140 units, is being designed by OMA/Rem Koolhaas.

Gray Davis and Will Meyer

The Related Group and Terra Group are co-developing the waterfront project. Meyer Davis is designing the space, which will be on the corner of Tigertail Avenue and Mary Street.  Schwartz will run the restaurant, catering, pool and bar service.

“With everything coming up so fast around us, the stakes are super high to make sure to deliver a place our neighbors new and old can grow with, frequent and make their own,” he said in a press release. “The vision for the restaurant is to create something similar to the Cypress Room but opening into a lush cozy courtyard that will become Coconut Grove’s own secret garden.”

Schwartz has restaurants in the Design District, Coconut Grove and Miami Beach. He will also be opening at SLS Hotel & Residences in Brickell and Paraiso Bay Restaurant & Beach Club in Edgewater, both Related Group developments.