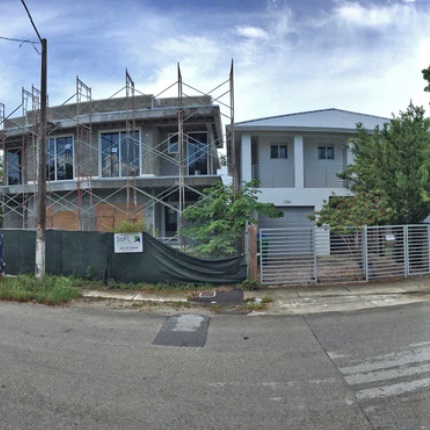 The properties at 3374 and 3384 Day Ave. in Miami’s West Coconut Grove. Photo by David Winker.

Miami allowed a duplex developer to finish construction after obvious setback violations were cemented by a  settlement, but a resident who wants city regulations enforced isn’t giving up her fight.

Miami and developer 3384 Day Investments Inc. signed a settlement Tuesday to end a lawsuit the company filed against the city last year. The agreement modified the project, but the duplex at 3384 Day Ave. ultimately will be completed just over 4 feet from the next-door building at 3374 Day Ave., much closer than the minimum 10-foot setback requirement.

The City Commission in July voted 4-1 to settle rather than fight the lawsuit on the advice of City Attorney Victoria Méndez. She said the city faced costly litigation it could lose in light of its previous project approval, albeit in error.

The city said it will defend its actions.

READ THE REST OF THE STORY HERE