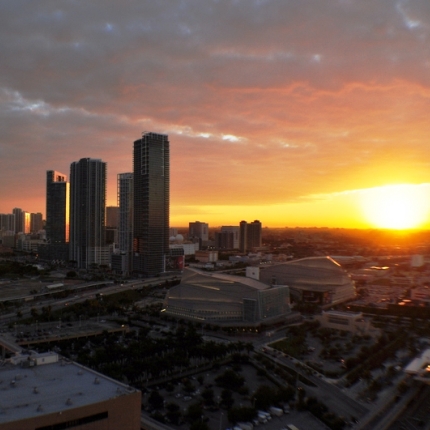 ‘Record demand for Miami properties continues to fuel significant appreciation despite much needed supply readily becoming available,’ said Liza Mendez, chairman of the board of the Miami Association of Realtors. ‘While the Miami real estate market continues to strengthen, rising inventory is fortunately creating a more balanced market between buyers and sellers. Such balance reflects the health of the local market,’ she added.

New listings of single family homes increased 13.8% year on year and condo listings surged 20.1%. The association believes that this reflects the success of its campaign to encourage home owners to sell during the severe housing shortage experienced in 2012 and 2013 as more inventory creates a more balanced market between buyers and sellers.

‘The current performance of the Miami market reflects seller confidence. Home owners in Miami have recovered value lost during the downturn and have realized it’s a good time to sell, which is bringing much needed supply to the local market after years of very limited housing inventory,’ explained Francisco Angulo, residential president of the association.

Active listings at the end of January increased 24% overall with inventory of single family homes up 17.1% and condominium inventory up 27.5%. At the current sales pace, there is a 5.6 month supply of single family homes, a slight increase from 5.3 months in January 2013, and a seven month supply of condominiums, up from six months in January 2013, an increase of 20.9%.

Miami real estate continues to be sold quickly and almost at asking price. The median number of days on the market for single family homes sold in January 2014 was just 46 days, a decrease of 2.1% from the previous year. In addition, the average percent of original list price received was 95.4%, up 1% from 47 days a year ago, indicating that single family homes are being priced right and buyers realize they need to be competitive in the current market.

The median number of days on the market for condominiums sold in January was 56 days, an increase of 14.3% from the same period in 2013. The average sales price was 96.1% of the asking price, a negligible decrease of 0.7%. The data also shows that the number of cash sales is falling. Some 62% of total closed sales in January were all cash sales, compared to 65% in January 2013, but is still significantly higher than the national average of 33%. All cash sales accounted for 47.3% of single family home and 72.4% of condominium closings, compared to a year ago when cash sales were 50.1% of single family home sales and 75.4% of condominium sales.