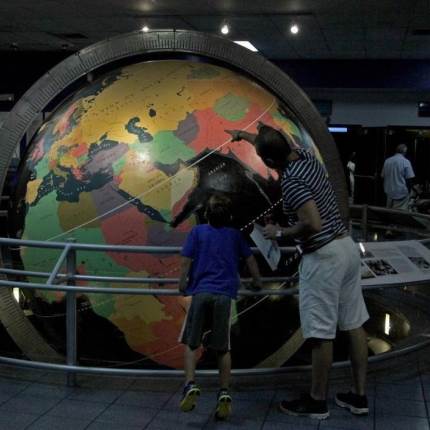 The complex is relocating to a new $300 million campus in Museum Park in downtown Miami in summer 2016.

The last planetarium show, using the Spitz Model B Space Transit Projector — which will be retired — was scheduled for 9 p.m. Sunday brought hundreds of people — some for the first time, others looking back on their own childhoods like Diaz, still others clueless about the transition.

Andres Garcia, now in his 50s, said he remembers coming to the museum as a kid with camp or school trips. He said Sunday was his first time back in more than 30 years. “It brings back some great memories,” he said. Garcia recognized a few items still on display: a giant globe in the lobby, a huge bear and a sloth statue in the parking lot. “It’s sad it’s closing but change is a part of life,” he said.

“This museum is clearly loved by the community,” he said. “I think the new museum will quickly develop that relationship with the community.”

As a frequent visitor, Dianne De La Cabada said the museum’s moving is “bittersweet.” De La Cabada came to the museum as a teenager and young adult and remembers seeing light shows set to music including from The Doors. In recent years, she has accompanied her son Kyle, who loves learning about science and space. “I’ve been coming here for a long time,” said Kyle, 8. “I’ll miss it.” Added his mom: “It’s hard to say goodbye, but we are looking forward to the new museum.”