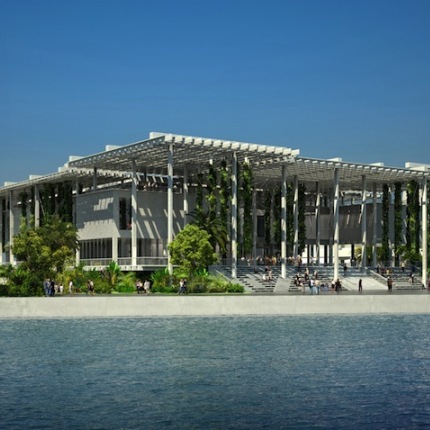 A gleaming addition to Miami’s waterfront greeted the art world elite as they jetted into town last week for the 12th edition of Art Basel Miami Beach: a $131 million art museum the city hopes will anchor its burgeoning cultural scene.

“Our cultural infrastructure has evolved,” said Thom Collins, director of the Perez Art Museum of Miami, also known as PAMM, which officially opened last Wednesday. “We know people come here because they want the tropical environment. We needed to give them something that addresses our main competition, the beach.”

From sprawling, shaded verandas dotted with greenery, the Herzog & de Meuron-designed waterfront museum offers stunning vistas of Biscayne Bay and downtown Miami’s high rises. Inside the yawning space, architects used rough wood flooring and ceiling-high hurricane-proof windows to allow the building to blend into the existing landscape. “The ingredients here are cement, water, vegetation and sun, and the building should respond to these things,” said Jacques Herzog, whose firm famously converted a London power plant into the Tate Modern and designed San Francisco’s de Young Museum in Golden Gate Park.

Outside a plaza is being built designed by landscape firm James Corner Field Operations, renowned for the New York’s elevated High Line park in Manhattan. Since the first Art Basel Miami Beach, a spinoff of the fair held for decades in the Swiss city of the same name, Miami has undergone a cultural renaissance. Across from the convention center that hosts Art Basel is a Frank Gehry-designed symphony hall flanked by a large park where hundreds gather to watch projections of the performances inside the building broadcast on its exterior.

“People now think there is a component of Miami that includes art and culture,” said Carlos de la Cruz, a prominent Miami art collector who in 2009 opened a privately funded 30,000 square foot exhibition space filled with works from his family’s private collection, including works by Felix Gonzalez-Torres, Gabriel Orozco and Rudolf Stingel. “They wouldn’t have thought of that 20 years ago, and Art Basel is what put that idea there.”

The Wynwood neighborhood, a once-blighted area just north of downtown Miami, is now home to graffiti murals by world famous artists and galleries that attract collectors from around the world. In the Design District, award-winning restaurants buzz throughout the year and luxury retailers like Louis Vuitton and Cartier have taken up nearby storefronts.

Miami’s image as a rising cultural center has also been a boon for its volatile real estate market. “Most people can’t believe the changes,” said Jorge Perez, chief executive of the Related Group, known as the “Condo King” of Miami. “Art has been one of the great catalysts in producing this great reaction to Miami and it translates most clearly in the real estate market,” he added, citing a new boom in luxury condo construction in the Miami area, with some buildings featuring high-priced art installations to attract buyers.

The hot real estate market has also attracted some high-profile firms, including Iraqi-born British architect Zaha Hadid, designer of a futuristic 62-story tower across the road from the new art museum, as well as Denmark’s Bjarke Ingels Group and Britain’s Lord Norman Foster. Yet the museum, partially funded by a $100 million public subsidy, came under fire in 2011, when Perez, a poster child for the city’s real estate collapse, got his name attached to it thanks to a donation of cash and art valued at $40 million.

Perez, who came under fire when billions of dollars of Related Group projects went into foreclosure, fired back at his critics, saying his intent with the museum was not only to burnish his own legacy, but to inspire more philanthropy from other wealthy Hispanics in the city. “Many times we’ve gotten the rap that either because we’re young migrants, or because we don’t have a tradition of giving we haven’t given our fair share to philanthropy,” he said. “Hispanics will be part of the mainstream of philanthropy it won’t just be Guggenheim, Getty and Whitney. You’ll also have Gonzalez and other Hispanic names that are becoming more and more a part of the economic mainstream.”

Miami remains a relatively young city, decades away from becoming a prominent art center outside of the week surrounding Art Basel and a host of satellite fairs. Many of the skyscrapers that now line the water were not there a decade ago and the region lacks major industries and major artistic educational institutions found in other cities. But art boosters say the new museum, like the Art Basel, will bolster Miami’s credibility as a global art hub. “I think it’s going to be a Miami icon without trying to do anything other than being a really great museum,” Terence Riley, former curator at New York’s Museum of Modern Art, said during a public talk in November. “It’s going to be considered one of the most important contemporary museums anywhere,” added Riley who helped launch PAMM.