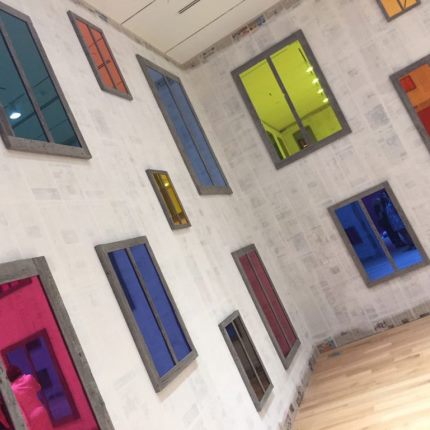 Miami is bursting with new museums, all looking to carve a cultural identity out of the tropical landscape. The success of the Art Basel Miami Fair and the world class events that surround it have propelled a surge of major museum projects.

The past few years have seen the debut of Perez Art Museum Miami (PAMM) on the bay, a major remodeling of the Bass which opened October 29th, the stupendous arrival of Faena Art and accompanying luxe hotel, and the recent announcement of the Rubell Family Collection’s move to the gentrifying neighborhood of Allapattah. There’s also the arrival of Institute of Contemporary Arts (ICA) ready to open in its huge new digs in December.

The first new museum out of the season gate is The Bass which opened to the public in late October after a 2 year renovation. Breaking ground in 2015, The Bass embarked on a $12 million project to transform the limited space. They have a primo location on Collins Avenue with a straight shot view of the ocean and a large park that serves as a cutting edge sculpture garden during Art Fair week. From an expanded and more dynamic physical space The Bass also has a new visual identity including name, logo and website. Eternity Now, 2015 by Sylvie Fleur, a neon sign, graces the top of the entryway.

Over in the Design District a new museum with a controversial past arises. The Institute of Contemporary Art came tumbling out of the wreckage of MOCA (Museum of Contemporary Art) in North Miami when it imploded in 2014. The frustrated curator, Bonnie Clearwater, now at the Ft. Lauderdale Museum of Art, resigned when the city declined to support a major expansion. That led to a dispute between board members and the City of North Miami, when the institution split in two. In response, frustrated board members took the majority share of the permanent collection and left. The result was a new museum they created called the ICA, under the guidance of deputy director and chief curator Alex Gartenfeld.

The museum has been holing up in the oddball space connected to The Moore Building which was an old furniture showroom built in 1921. It has four open floors and is attached to another more contemporary space they use next door that faces NE 2nd Avenue. A new museum has been in the works for years and now staffers are ready to move the permanent collection and operations from their temporary home in the Moore Building to the new space at 61 NE 41st Street Designed by Aranguren + Gallegos Arquitectos, the Design District space will measure 37,500 square feet, including a 15,000-square-foot sculpture garden. A gift from Irma and Norman Braman allowed the museum to secure the land rights for the sculpture garden. The museum will have three floors, two of which will be devoted to temporary special exhibitions. Unlike most other Miami museums, general admission will be free.

So how do all these new museums see their place in the sun? The ICA has a different focus from Pérez Art Museum Miami (PAMM), which has been exhibiting contemporary art from Chinese, Haitian, Latin American and American artists. The Bass plans on curating edgy contemporary art from all over. The ICA specializes in mid- and late-career European artists who have yet to garner massive success in the States.

When Art Basel Miami and Art Fair Week rolls around in December, the new museums will be ready and waiting to show their new colors inside and out.