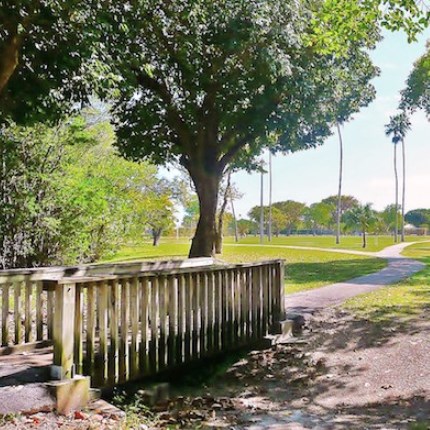 One of Miami’s most picturesque parks has a flooding and drainage problem, and city officials are working to preserve the shoreline.

Miami city officials teamed with The Nature Conservancy and have devised a resilience plan to preserve Morningside Park’s shoreline. It’s vulnerable and is being damaged because of stronger storms, sea-level rise and wakes from boats.

Stakeholders agree something must be done to help preserve it, but some residents are not on board with the city’s proposal to create an elevated berm that could include bushes, green elements, trees and mangroves.

“We are not looking at a massive infrastructure of 10 feet high,” said Miami City Commissioner Ken Russell. “What we are picturing here is a gentle berm of a few feet, whatever is necessary that can be added to, even over the years, to continue to address whatever sea level rise comes and whatever storm surge we anticipate.”

A group of neighbors fears a buildup would block their bay views and the bay breeze and clutter the open spaces with clusters of trees.

They point to a picture of Peacock Park, located next to Miami City Hall in Coconut Grove. A photo from the 1980s shows a wide, open space and a clear view of Biscayne Bay. A second picture, taken last year in the same spot, shows the views and open spaces completely blocked by clusters of trees. Some Morningside residents believe the plain and simple sea wall is their best option.

“That is the lesser of the evils,” said Morningside resident Elvis Cruz, who is against the city’s proposal. “It is only 3 feet wide as opposed to 60 feet wide, that we would lose in active useful recreational park land.”

The project is in the planning stages now and neighbors complain that they have not had an opportunity to chime in on the project. They hope to as it moves forward.