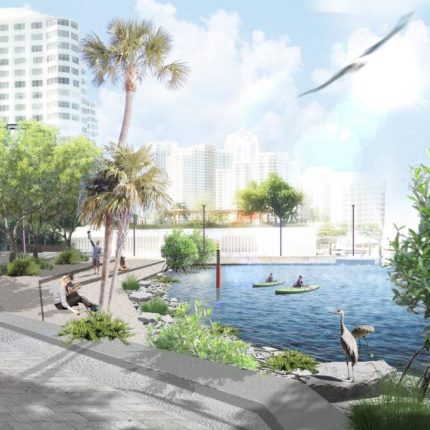 The Miami Baywalk is set to receive a makeover 42 years after its inception.

The Miami City Commission approved new design guidelines for the walkway, which stretches 4.5 miles along Biscayne Bay, from the Northern tip of Coconut Grove to Edgewater.

In 1979, Miami’s municipal government passed an ordinance requiring developments along the bay to be set back 50 feet for public access. Developers were forced to build and maintain a 25-foot-wide public pedestrian promenade.

The end result created a jumbled walkway. Some parts, like along Brickell Bay Drive, were well maintained with public works of arts and benches, while others were left to ruin with no overhead lighting and pedestrian amenities.

The new rules, passed Thursday, aim to create a homogeneous — and beautified — sidewalk. They stipulate which types of vegetation to plant and paving materials to use, the landscape design layout, the necessary overhead lighting fixture, and signage. The Miami Downtown Development Authority selected Savino Miller Landscape Architects to set the guidelines in 2017.

“Water is a part of Miami’s identity, and this city commission vote to unify a vision for the Miami Baywalk is a tremendous step forward for this landmark project,” said Miami City Commissioner Ken Russell in prepared remarks.

Developers seeking new permits for existing structures or new projects will be subject to these new requirements for their section of the walkway, explained Manolo Reyes, Miami commissioner and chairman of the DDA.

But, areas zoned for single-family homes and small apartment buildings, such as duplexes, are exempt. Miami Mayor Francis Suarez still needs to approve the regulations. Reyes is confident that the legislation will sail through.

“You can tell the bank that he’s going to sign,” Reyes said.