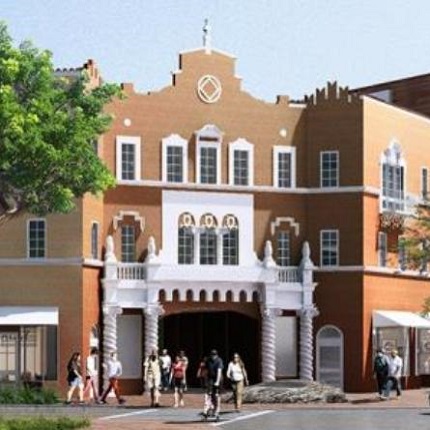 Miami-Dade County has applied with the City of Miami Building Department to obtain the permits and begin reconstruction of the Coconut Grove Playhouse, Chief Operations Officer Jimmy Morales confirmed to Miami Today.

Once the county gets the necessary city permits, the county can begin site preparations, procure the construction contract, and then begin the partial renovation and construction of the playhouse.

Overall, the procurement can take up to a year, followed by two to three years of construction.

“We won’t know that until a contractor comes in and gives us their estimates,” Mr. Morales said. “In addition, it’s uncertain how long the permitting process can take as it is under the purview of the City of Miami.”

While those steps take place, the county is to remain in touch with Florida International University, which is a co-lessee of the playhouse, and with theater company GableStage, which is to operate and occupy the renovated playhouse.

“They’re continuing to work together during the construction period to develop the educational training and outreach programs that are going to come out of the facility,” Mr. Morales said.

The county approved $21.6 million for the construction, according to information posted online by the Miami-Dade County Department of Cultural Affairs. In December 2018, the John S. and James L. Knight Foundation awarded the county $2 million for the playhouse project for construction of the 300-seat theater.

With inflation and construction costs rising, it is still unclear how much the project would cost by the time construction is set to begin.

“We’re probably a year and a half to two years away from actually getting a construction bid,” Mr. Morales said. “The current pandemic generated cost increases, so part of our hope is that the market will come back to some normalcy by the time we go to market. Right now, we believe we have adequate funding for it; we’ll cross that bridge when we come to it. I’m sure if there are shortfalls, we’ll figure out how to come through them; we’ll either have to do some value engineering or identify some of the funding, but for now, we believe we’ve got the adequate funding.”

Miami-Dade County and the City of Miami just resolved in June a three-year legal battle stalling the project. The county, therefore, received the final Certificate of Appropriateness for the project and is now able to proceed with construction.

The Coconut Grove Playhouse closed its doors permanently 16 years ago. Now county officials are excited to be able to move forward with the project.

“There’s a whole generation of Miamians who’ve missed out on the Coconut Grove theater experience,” Miami-Dade Commissioner Raquel Regalado said in an email. “I’m so pleased that the work to bring back this jewel is continuing and can’t wait for it to take its rightful place as the centerpiece of the Grove’s central business district revitalization.”

The design proposed by the county includes a 300-seat theater that includes the remaining historic elements of the original theater.

“The entire historic front building, the iconic view that has been the southern threshold to the Coconut Grove commercial area on Main Highway, will be restored, including the reconstruction of the 1927 Kiehnel and Elliott design of the parapet at the corner entry, the restoration of the street level storefronts along Main Highway and Charles Avenue, and the return of the building’s original sienna color,” the county’s website details.

Also, the original double proscenium arch over the stage, the solomonic columns, fountains, decorative grates, and cornice are to be saved and incorporated into the design of the new theater. Simultaneously, the Miami Parking Authority is to build a garage next door for the same capacity.

The county already has a professional services agreement with a team led by Arquitectonica for a total cost of $2.4 million that includes basic services, contingency, and reimbursable expenses for the entire architectural and engineering team, the county’s website says.

Miami-Dade is also working on redevelopment of 17 acres of county-owned land downtown, known as the Metrocenter Project. The aim is to transform downtown Miami into a 24-hour community that also includes a 300-seat theater.

When asked about having two cultural facilities of the same size in the county, Mr. Morales said he did not believe they were competing.

“I think they’re two separate things,” Morales said. “The Coconut Grove Playhouse was for years an important cultural institution and economic attraction. It created and brought people to the Grove, restaurants, bars and shops benefited from it, and that corner has now been dead for 16 years. So, I think that project is about bringing it back in a sustainable way.”