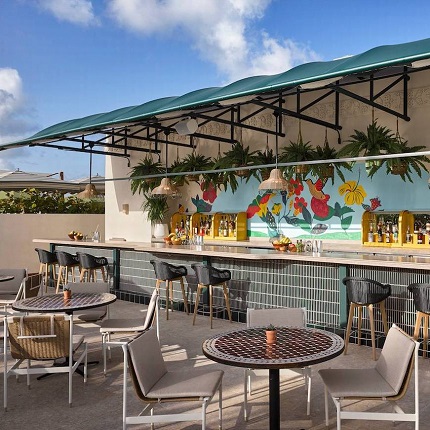 The same team that revived an old, favorite Miami bar set its sights on reviving one of the most iconic hotels in Coconut Grove as a hangout.

Now, just as Randy Alonso and Chris Hundall gave South Miami residents a reason to visit a reimagined Fox’s Lounge, they’re hoping memories of the Mayfair hotel bring Miami back to dine and drink there.

Their latest project was trying to create three cool new spaces to eat and drink within the Mayfair, built in 1985 but recently emerging from a $50 million renovation as the Mayfair House Hotel & Garden. This is their second takeover of a hotel after the Esme Miami Beach.

Their goal was to repurpose old spaces, like an unused elevator shaft that is now the bar in the center of the iconic courtyard at the hotel’s center. And to build new areas to stay for longer than a cocktail. To do that, they started with reworking the vibe and flavors of a new, all-day restaurant they’re simply calling the Mayfair Grill. 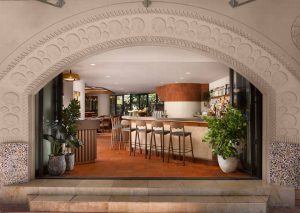 A look into the Mayfair Grill in Coconut Grove. (PHOTO CREDIT: Will Pryce Handout)

Hudnall, who grew up Tempe, Arizona, said he wanted flavors that recall the Southwest, with most of the cooking done on an eight-food open-fire grill. They’re calling it Sonoran cuisine, though the menu leans generally into pan-Mexican dishes. Navajo bread, their take on fluffy, deep-fried Native American fry bread, stands out on the menu, served with braised beef shank or Hen of the Woods mushrooms (to address a vegetarian palate.)  Cactus fries, aguachile brightened with pomegranate and cactus pear sorbet are thoughtful additions to a menu with more standard dishes, like braised lamb shank with adobo rub or Brazilian-cut picanha steak with mole (though mole is not generally seen in Sonoran cookery).

“I couldn’t find a lot of the flavors I grew up with, simple dishes but with a lot of flavors and a lot of spice,” Hudnall said.

Diners waiting for their seat will enjoy the Fountain bar, a sitting area repurposed from one of the Mayfair’s original fountains, which never operated. Here it becomes a banquette to hang out and try cocktails based on different kinds of agave spirits, tequila and mezcal. The rooftop bar changes direction, both in region and cuisine.

“It’s a little more playful up there,” Hudnall said. 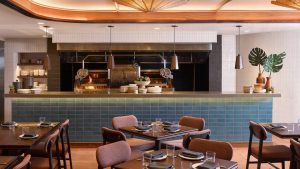 Bar at the Mayfair Grill (PHOTO CREDIT: Will Pryce Handout)

Named Sipsip for the Bahamian word for gossip, the rooftop bar’s menu aims to highlight Bahamian food to reflect Coconut Grove’s origins as a Black Bahamian town. You’ll find seafood the focus, with conch in ceviche and fritters, and more general sea-side Caribbean bites, like fish sandwiches and even a version of Johnny Cakes. Rum-based drinks are the real attraction, classic beach cocktails using fresh fruit, like mai tais, zombies, daiquiris, all with the touches that made their Lost Boy cocktail bar and the revived Fox’s popular spots.