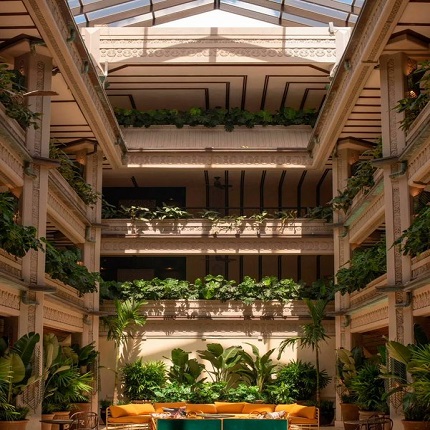 When you open the front door of the new Mayfair House Hotel & Garden — the original carved wooden door that has been lovingly restored — you enter the past and gaze into the future.

Your first step inside reveals a lush tropical garden, an oasis away from the bustling streets of Coconut Grove. Walk out into the open-air courtyard filled with greenery and gaze at the floors above, where outdoor walkways lead to cool, dark, elegant rooms. Grab a seat, order a drink and marvel that somehow, miraculously, a piece of the Grove’s past has been preserved.

History is endangered in Coconut Grove these days. While crowds have returned to the refurbished CocoWalk and the many new restaurants, the charming old bungalows are being replaced by huge concrete cubes at an alarming rate, and gentrification threatens the historic Black Grove neighborhood.

The new Mayfair, however, pays tribute to everything that made the Grove special. The $50 million renovation of the hotel, which first opened in 1985 and was designed by architect Kenneth Treister, was completed over two years. Maintaining Treister’s unique vision — the Barcelona buildings of Spanish architect Antoni GaudÍ inspired him — was a crucial piece of the puzzle, according to Matthew Goodrich of the New York-based design studio Goodrich, which oversaw the renovation.

“We had such love for the building,” Goodrich said. “Kenneth Treister has pulled together so many unusual design references into one whole language. The first thought we had was: How do we stay out of the way and still refresh it? How do we bring back elements and make a new set of layers that augment what’s there?”

Here’s how: Preserve original pieces like the front doors, the ornamental cranes soaring throughout the courtyard, the original door knockers on the hotel rooms. Create light in the small, once-dark lobby by adding windows and an installation by artist Michele Oka Doner. Resurrect the Mayfair Grill with a new concept and menu. Turn a long-buried fountain into a restaurant and an elevator into a bar that serves craft cocktails.

“We went with Kenneth Treister’s vision for the building,” said Ilan Segal, founder of Soulity, which oversees creative direction for Brookfield Properties lifestyle hotels, the Mayfair ownership group. “He always imagined this as a garden hotel first and foremost.”

The garden was neglected over the years, the tile in its signature fountain chipped and broken. Goodrich had to recreate and match the originals,

“We didn’t want to lose it.” Now, you can sit amid the plants and pools with a glass of bubbly or a mezcal or tequila cocktail,” Segal said.

The courtyard is also home to the Fountain Bar, operated by Lost Boy & Co., which is also taking over the Mayfair Grill and SipSip, the rooftop bar and seafood restaurant (Lost Boy also oversaw the beverage program at the Esmé Miami Beach hotel). The space where the bartender works was once an elevator shaft. Now it just lifts your spirit, not your body.

“This is where you go and lose four hours after two bottles of rosé,” jokes Chris Hudnall, co-founder of Lost Boy. You’ll be able to order food there, too.

The MayFair Grill, just off the lobby, will serve a menu close to Hudnall’s heart: the Sonoran cuisine he grew up with in Arizona (a ventanita there will also serve grab-and-go items). The restaurant features a wood oven on one side and an eight-foot open fire grill on the other.

Expect an a la carte menu that features a lot of peppers and spices as well as Navajo bread, a puffy bread with savory toppings like beef shank or a mix of mushrooms, aged Mexican cheese and beans.

In keeping with the Southwestern theme, the bar will feature more than 80 different mezcals and 80 to 90 tequilas. We are pretty sure all of them go with the delicious wood-fired cheese appetizer, wrapped in a squash blossom and a banana leaf.

Upstairs at SipSip, the menu is seafood-driven, offering ceviches, stone crabs, oysters on the half shell and lobster rolls. SipSip has its own kitchen, plus its own cocktail program featuring around 80 rums. A bright Caribbean-themed mural by Bahamian artist Angelika Wallace-Whitfield sets the tone for the rooftop space, which has a water view and will include live music and other events.

While the restaurants and bars are open to the public and encourage a sunny, tropical vibe, the guest rooms fulfill a different role: that of sanctuary. Goodrich said that while staying true to the landscape and energy of the Grove was crucial, the design team also understood that guests would want a refuge.

“One of the things we wanted to do was make sure the hotel felt very much an expression of where it is,” Goodrich said. “What we noticed in other projects on the beach is that they tend to be very white, very bright. Every surface is white, and light is bouncing around. If you’re outside in the garden in the sun, that can be a beautiful experience, but then you crave a little bit of shade and coolness, a retreat.”

So the 179 rooms are relaxing and cool, painted in calming shades of green or gray and filled with custom-made furniture, including headboards. The rooms are different shapes, and all have balconies, some with outdoor showers for cooling off while you lounge. Others have stand-alone tubs in the room, a nod to decadence. No two rooms, which range in size from 500 square feet to 1,124 square feet, are alike.

Room reservations are open now, but the restaurants and bars won’t be open to the public until Sept. 14. When they are, general manager Lucy Martin expects to see many locals wandering in for dinner, drinks or private events.

“I went to a Chamber of Commerce meeting a couple of weeks ago, and there was so much excitement that Mayfair was coming back,” Martin said. “It’s nice to be part of the community.”

Goodrich agrees that the blend of private and public space in the building make it special.

“If you wanted to build this building now, I just don’t think you could do it,” Goodrich said. “It would be cost prohibitive. So it was a once-in-a-lifetime opportunity to get to work within a building this special but also to refresh and stabilize it. It would have felt really weird to steamroll over all of this.”