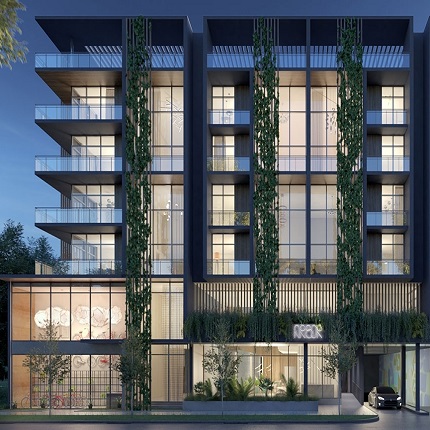 The developer of a boutique condo project near CocoWalk in Coconut Grove has gone dark, and its lender is looking to foreclose on the partially completed building.

Canadian lender Trez Capital filed a foreclosure lawsuit against the developer of Arbor Residences, alleging the company failed to repay its nearly $21 million loan and failed to complete the five-story, 48-unit building at 3034 Oak Avenue.

Trez Capital’s Florida office, which is led by Brett Forman, provided the $20.7 million construction loan in 2019, as well as a $2.3 million bridge loan in 2017. The project was expected to be completed in 2019. Dozens of liens have been filed against the developer during the past three years.

It’s unclear when work stopped on the project, but the building has windows and doors. The ground floor and driveways appear unfinished, and two “Sorry, we missed you” stickers from UPS have been tacked onto the building for weeks, on top of a code violation from the city of Miami.

Hamann said he is in the late stages of refinancing the loan, and called it “unfortunate timing” for Trez Capital.

“We intend to finish it and deliver a high quality building,” Hamann said. “The project is nearly sold out,”

Trez said it is owed about $18 million in principal payments as of Aug. 12, court filings show, citing the developer’s failure to make “all payments” under the note and amounts due under a forbearance agreement reached in June. Under that agreement, the developer was supposed to complete the project and make a $750,000 payment, plus a forbearance fee of about $220,000 and attorneys’ fees by June 27; and pay another $4.3 million by July 13.

When the project launched, Hamann told The Real Deal that he was targeting buyers who were priced out of the Coconut Grove market, pointing to single-family homes starting at more than $1 million.

“We offer an extremely centralized location at a price point that’s lower than that,” Hamann said in 2017.

It’s within walking distance of CocoWalk and the neighborhood’s downtown. Since then, prices for single-family homes and condos in the Grove have skyrocketed. Buyers at Arbor are likely even more outpriced than they were before.

Rising construction costs, labor issues and supply chain problems are affecting developers, as well. The developer of a stalled condo project in Bay Harbor Islands transferred the project to Alta Developers earlier this year because the firm was unable to secure financing and faced higher than expected costs to build the development.

Arbor, designed by Behar Font & Partners, was expected to have two- and three-bedroom units ranging from about 1,500 square feet to 2,300 square feet, plus four penthouses. The duplex loft and townhome-style units were to have 20-foot ceilings, and overall amenities were to include a rooftop terrace with an outdoor theater, and a backyard deck with pools and lounge areas.