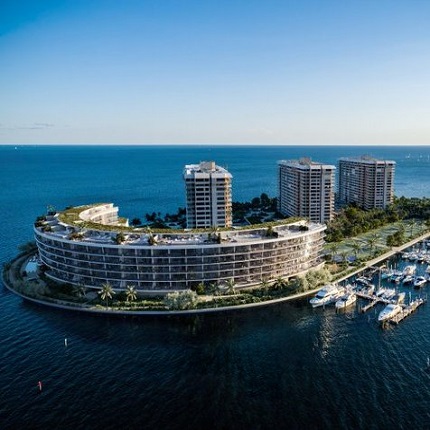 A group of residents sued the city of Miami in an effort to stop the controversial Vita at Grove Isle condominium development, now spearheaded by Ugo Colombo.

Colombo, founder of CMC Group, is developing the six-story, 65-unit luxury project on part of Grove Isle. The 20-acre island is just off Miami’s Coconut Grove neighborhood and is currently home to three 18-story condo towers developed between 1979 and 1981.

Tigertail Association, which represents areas in north Coconut Grove, as well as Grove residents David Schaecter, Bob Denholtz, Elizabeth Tamayo, Roberto Jakubowicz, Melissa Meyer, Veruska Vascomez and Cecilia Zurita just sued the city of Miami, claiming it illegally granted building permits for the project. Some of the plaintiffs live on Grove Isle and others on the mainland near the island. CMC Group and Colombo are not named defendants, and declined comment.

The suit, filed in Miami-Dade Circuit Court, calls the planned building “out of sync,” referring to its curved design as “an oversized stadium-like structure.” The plaintiffs, some of whom live within 500 feet from the project site, also raise concerns about noise, traffic and construction debris.

Much of the suit also centers on the issue of platting, which is required when a single tract is to be subdivided into two and before building permits are issued.

“Platting is important for growth and development planning because it gives the city a blueprint for infrastructure on the subdivided lot, such as roads, sidewalks and power,” said attorney David Winker, who represents the plaintiffs. “In this case, the entire island is one tract, consisting of the development site and the land where the existing condo towers stand, he said. Yet, the city subdivided the tract into two, and should not have done so before the land was platted.”

In internal memos in 2017 and 2019, the city also said that building permits should not be issued because the island was not properly platted, according to records attached to the complaint. But then the city switched course after Glen Waldman, an attorney for the Grove Isle condo association, sent a letter to Miami officials in 2019 claiming the city’s opinion over the inability to issue permits was a violation of the “civil and constitutional rights” of condo owners. This exposed condo owners to more than $500 million in damages, Waldman wrote.

“Miami officials ultimately caved in to political pressure to issue the permits,” the suit says.

The suit follows more than a decade of litigation over the project that ended last spring when an appellate panel upheld a lower court’s approval of a settlement between the developer and the condo association for the existing condos.

The association and property owners had contested the demolition of a shuttered hotel, restaurant, indoor health spa and a clubhouse, as well as the removal of the island’s tennis courts. Some of the amenities were on the vacant portion of the island where Vita is supposed to rise.

In 2020, the condo association and the developer reached a settlement agreement that grants owners in the three existing Grove Isle condo towers access to a new restaurant and club without having to pay dues.

Miami-Dade Circuit Court Judge Michael Hanzman approved the settlement in May 2020 and dismissed a separate 2019 lawsuit filed by the nonprofit Save Grove Isle and 22 property owners. The appellate court upheld both of Hanzman’s decisions in 2021.

At the time, Shubin said the appeals court affirming the settlement was a “giant step forward for the entire Grove Isle community” and that a majority of residents had “put their disputes to rest and focused their energies on ensuring the development of a world-class new residential community in harmony with its neighbors.”

Joseph Serota, the attorney for the existing condo association, said the latest lawsuit doesn’t have any bearing on his client, which is not named in the complaint.

“I don’t see anything new in this lawsuit that hasn’t been addressed by the courts,” Serota said. “And I don’t believe it will have any effect on the settlement.”

The project will have private elevators opening directly into each residence. Units that are not penthouses will range from three to four bedrooms and from 2,500 square feet to 5,000 square feet, according to Cervera Real Estate which is marketing the condos.

Colombo’s notable Miami projects include the Brickell Flatiron condo at 1000 Brickell Plaza, and he is developing the Onda condominium at 1135 103rd Street in Bay Harbor Islands in partnership with Morabito Properties.