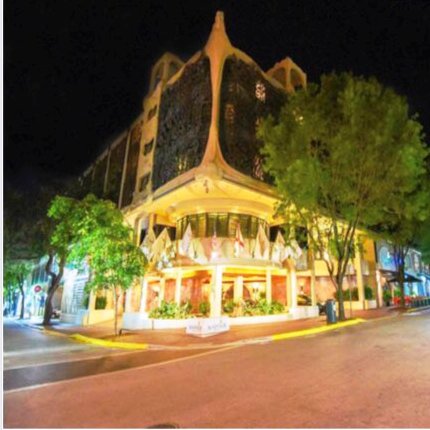 A Coconut Grove institution is reopening this summer: The Mayfair Hotel will welcome guests again in August, following a $50 million remodel.

The colorful hotel with artistic flair, known for its rooftop pool, open-air courtyard and a distinction to go with the Miami neighborhood where it resides, will reopen with 179 suites. Each will include a terrace, dining, living and sleeping areas.

Originally opened in 1985 as the Mayfair Hotel & Spa, it’s being rebranded as the Mayfair House Hotel & Garden. The hotel’s original architect, Kenneth Treister, designed it taking inspiration from the famous Antoni Gaudi-designed buildings of Barcelona. The Spanish architect is a pioneering figure of Art Nouveau and best known for his intricate designs. 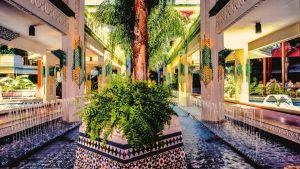 The Mayfair was purchased for over $40 million in 2019 by Brookfield, a Canadian asset management company that also owns The Diplomat Hotel in Hollywood in Broward County. Brookfield closed the Coconut Grove lodging property in August 2021 to do the renovations. Now, the Mayfair will be managed by Crescent Hotels and Resorts, a hospitality group based in Virginia that runs hotels across the U.S. and Canada.

“It’s a very interesting property,” said Michael Metcalf, chief operating officer of Crescent Hotels. “The open atrium really stands out, with phenomenal fountains and a tremendous amount of architectural detail in the carved wood and handmade tiles. Every aspect of this hotel is bohemian.”

New York-based interior designer Matthew Goodrich said that he jumped at the opportunity to redesign the hotel’s interiors and also do the branding and graphic design.

“It’s such a unique and unusual hotel, with the level of detail, the design vocabulary and loving way it was put together. It’s a hotel that wouldn’t be built today in terms of the design detail,” Goodrich said,

He noted many hotels are designed foremost with efficiency and scale in mind. he remodel sticks to the vision of Treister when he designed the Mayfair in the 1980s, with customized rooms, bright colors and lots of tropical fauna. One of his favorite details is that each room, in addition to having a number, also has its own flower or plant name. And the hotel has maintained the original hand-painted tiles for each room’s name.

“It’s a layered and lavish design,” Goodrich said. “There’s a huge courtyard in the middle that is the central feature. All the corridors are open, so you’re outdoors as you move about the hotel.” Goodrich wanted the makeover to retain Coconut Grove’s unique character and reflect that in the hotel’s new design, with tons of tropical, native plants growing all over and with bohemian art and design. To do that, artists were commissioned to do individual colorful pieces for the hotel rooms and common areas of the property. “We want to represent the neighborhood. This is not South Beach or downtown.”

The refurbished Mayfair House Hotel & Garden will have 8,500 square feet of wedding and event space and a 1,600-square-foot gym. Hotel management has hired local hospitality group Lost Boy & Co. to manage the bar and restaurant. The group, which is behind the Lost Boy Dry Goods bar downtown and Tropezón on Española Way in South Beach, will reopen the main restaurant under the same name — Mayfair Grill — but with a very different menu focusing on wood-fired cuisine from the Sonora region of Mexico.

The rooftop pool bar called Sipsip, which is slang for “gossip” in the Bahamas, will give a nod to Miami’s Caribbean roots. The bar’s menu will focus on rum and tropical cocktails and have Caribbean food and live music. Metcalf of Crescent Hotels, the Mayfair’s hotel management group, said the hotel checks many boxes for consumers who are seeking out one-of-a-kind experiences. In particular, that’s individually designed rooms in the boutique hotel, the proximity to one of Miami’s oldest arts districts and being across the street from recently renovated CocoWalk open-air mall.

“Miami is probably one of the hottest destinations in the country right now,”  Goodrich said. “In the last two years with COVID, Miami became an even bigger hot spot and it’s shed a lot of light on what Miami has to offer. I think tourists are seeing it’s not just about the beaches.”