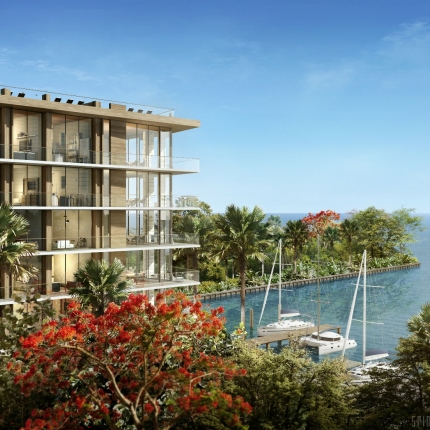 ROVR Development has unveiled plans for The Fairchild Coconut Grove, an exclusive residential enclave set to be the only luxury condominium development soon to rise on the waterfront in historic Coconut Grove.

With a scheduled Fall 2016 official launch, The Fairchild is scheduled to break ground in early 2017 with a spring 2018 delivery date.

ROVR amassed the one-acre parcel through a $12 million acquisition of the former Bay Colony Condominiums, in the Grove’s quaint Glencoe neighborhood.

The five-story Fairchild will bring tropical modernism within its 26 well-appointed and extremely private residences, all while remaining true to The Grove’s rich and storied past.

Its name and design will give a nod to the pioneers and eclectic residents that the Grove is synonymous for, yet The Fairchild will afford its residents a confluence of luxury and privacy that will define curated waterfront living amongst lushly landscaped grounds.

“Retaining its calm and tranquil nature, Coconut Grove has quietly become one of the most desired destinations to live in the United States,” said Oscar Rodriguez and Ricardo Vadia, principals of ROVR Development. “A host of iconic innovators, pioneers, artists and adventurers have called the Grove home since its founding. Today, that rich history is evidenced by its composition of residents and distinguishable architecture and design. The Fairchild will pay homage to this elegant past while elevating its bright future.”

Focused on creating a decidedly Grove feel, The Fairchild will be designed by esteemed local Coconut Grove architect, Max Strang, with interiors by Rafael de Cárdenas who was recently named Maison & Objet Americas’ 2016 Designer of the Year and has been consistently featured as an Architectural Digest ‘AD 100’ designer. Residences will range from 1,700 to 4,200 square feet with prices starting at $1.4 million.

Led by Oscar Rodriguez and Ricardo Vadia, ROVR Development has more than $400 million of real estate currently under development or slated for commencement. Miami born and raised, Rodriguez and Vadia began their friendship and professional partnership while at The Related Group of Florida. During those years, they delivered more than 5,800 luxury condominiums, rental and affordable housing units, with a development value of more than $1 billion.

Individually, their vast experience spanning a variety of development disciplines, extensive market knowledge and impeccable track record catapulted them to the top of South Florida’s real estate industry. After leading their own firms respectively, Rodriguez and Vadia reunited in 2015 to form ROVR Development. Cumulatively, they have more than 35 years’ experience and together, they are a formidable force.